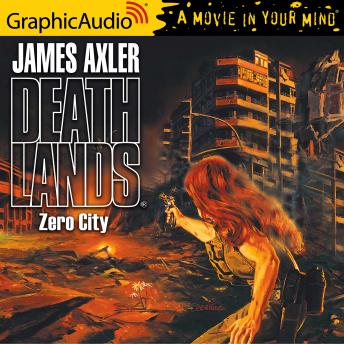 The nuclear Armageddon of 2001 put the world on an odyssey of savage rebirth. Now, little more than a hundred years after the blast, the quest for power is viciously embraced by America's new masters, barons commanding fortresses called villes, policed by stone hearts called sec men. But even in this dark new world, heroes and legends are emerging. One of them is a warrior survivalist named Ryan Cawdor, believed to possess pre-apocalyptic knowledge that holds hope for a beleaguered future. Hungry and exhausted, Ryan and his band emerge from a redoubt into a remarkably untouched pre-dark city and uncover a cache of weapons and food. But the group is not alone. Among other interlopers, the city is guarded by huge winged creatures, protecting the grisly secrets of a nearby barony. Holed up inside an old government building, where Ryan's son, Dean, lies near death, Ryan and Krysty must raid the treacherous ville across the desert where a local baron uses human flesh as fertilizer. In the Deathlands, evil is unstoppable.