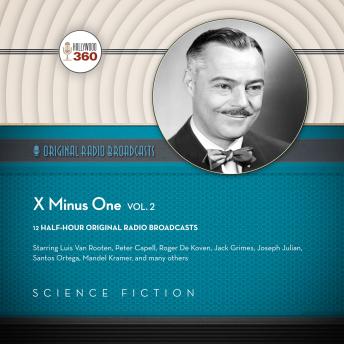 "Countdown for blastoff ... X minus five, four, three, two, X minus one ... Fire! From the far horizons of the unknown come transcribed tales of new dimensions in time and space. These are stories of the future; adventures in which you'll live in a million could-be years on a thousand may-be worlds."

Thus began each episode of X minus One, a half-hour science fiction radio series which was broadcast from 1955 until 1958. Initially a revival of NBC's Dimension X, the first fifteen episodes were new versions of Dimension X episodes, but the remainder were adaptations by NBC staff writers of newly published science fiction stories by leading writers in the field, including Isaac Asimov, Ray Bradbury, Philip K. Dick, Robert A. Heinlein, Frederik Pohl, and Theodore Sturgeon, along with some original scripts. Paving the way with fresh, imaginative stories, X minus One is widely considered among the finest science fiction dramas ever produced for radio.

Episodes Included are: "Dr. Grimshaw's Sanitorium," "Shanghaied," "The Castaways," "Vital Factor," "Hallucination Orbit," "The Defenders," "If You Was a Moklin," "Wherever You May Be," "The Last Martian," "The Moon is Green," "Venus Is a Man's World," and "The Trap."

"X Minus One was an anthology science fiction series, broadcast by NBC from 1955 to 1958, and is probably the best OTR program of this genre...Many episodes were adapted from stories by the major science fiction writers of the era, including Ray Bradbury, Isaac Asimov, and Philip K. Dick, and generally remained faithful to the originals. What may surprise modern listeners-used to Hollywood's takes on stock science fiction ideas-is how dark and bleak many of the stories could be, with downbeat endings in which the dashing hero does not save the day. This reflects the time in which the series was made, with Cold War-era paranoia and anxiety infusing many of the tales...Yet the best stories transcend their time and still offer powerful and exciting visions, both of the future and the present."-OldTimeRadioReview.com