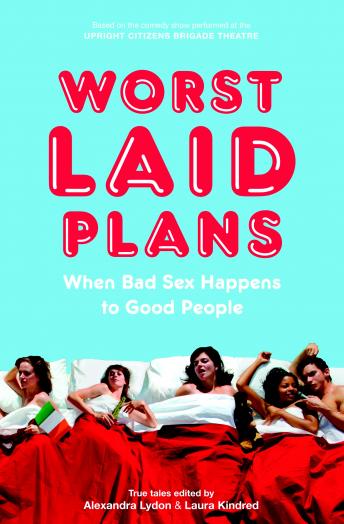 “When bad sex happens to good people, there is no recourse like full disclosure,” is the motto of Worst Laid Plans, a comedy show staged at the Upright Citizens Brigade Theatre, the highly influential comedy organization co-founded by Amy Poehler. True stories of terrible sex imparted by the brave survivors who lived to tell, Worst Laid Plans is part Vagina Monologues, part car crash, and wholly hilarious. From 'Trapped in the Closet' to 'IncogNEGRO' to 'The Farting Rapist,' this hour-long epic features recordings from live shows in Los Angeles and New York City, including performances by Laraine Newman (Original cast “SNL”), Mary Lynn Rajksub (“24”), Casey Wilson (“SNL”), and other performers who shamelessly take the mic to reveal all. Created by Alexandra Lydon and Laura Kindred, Worst Laid Plans premiered in 2007 and continues to play to sold out audiences to this day.

Never was humor so dry.

The performers you hear on this audio are not victims, but by and large the architects of their own misfortune. Because of that, a couple have chosen to remain pseudonymous. Others were more brave.
Tymberlee Hill (“IncogNEGRO”), “Suz” (“Trapped in the Closet”), Alexandra Lydon (“The Farting Rapist”), Laura Kindred (“You Bet Your Ass”), Casey Wilson (“Rub a Dub Dub, Thanks for the… Nub?”), Laraine Newman (“Beef Stroganoff”), Mary Lynn Rajskub (“My Fast Boyfriend”),  “Maddow” (“Tunnel to Nowhere”)

This title is due for release on May 4, 2010
We'll send you an email as soon as it is available!