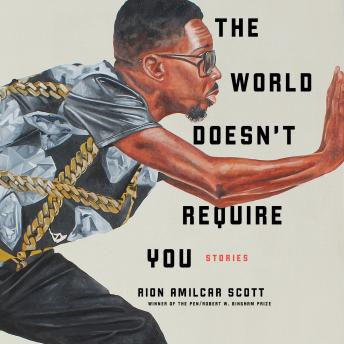 The World Doesn't Require You: Stories

The World Doesn't Require You announces the arrival of a generational talent, as Rion Amilcar Scott shatters rigid genre lines to explore larger themes of religion, violence, and love-all told with sly humor and a dash of magical realism.

Established by the leaders of the country's only successful slave revolt in the mid-nineteenth century, Cross River still evokes the fierce rhythms of its founding. In lyrical prose and singular dialect, a saga beats forward that echoes the fables carried down for generations-like the screecher birds who swoop down for their periodic sacrifice, and the water women who lure men to wet deaths.

Among its residents-wildly spanning decades, perspectives, and species-are David Sherman, a struggling musician who just happens to be God's last son; Tyrone, a ruthless PhD candidate, whose dissertation about a childhood game ignites mayhem in the neighboring, once-segregated town of Port Yooga; and Jim, an all-too-obedient robot who serves his Master. As the book builds to its finish with Special Topics in Loneliness Studies, a fully-realized novella, two unhinged professors grapple with hugely different ambitions, and the listener comes to appreciate the intricacy of the world Scott has created-one where fantasy and reality are eternally at war.