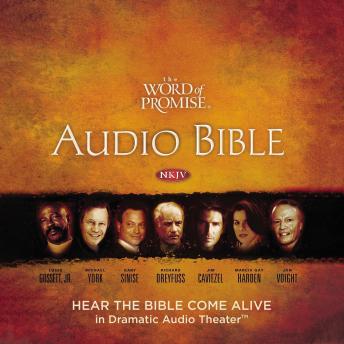 With an original music score by composer Stefano Mainetti (Abba Pater), feature-film quality sound effects, and compelling narration by Michael York and the work of over 500 actors, the The Word of Promise Audio Bible will immerse listeners in the dramatic reality of the scriptures as never before. Each beloved book of the Bible comes to life with outstanding performances by Jim Caviezel as Jesus, Richard Dreyfuss as Moses, Gary Sinise as David, Jason Alexander as Joseph, Marisa Tomei as Mary Magdalene, Stacy Keach as Paul, Louis Gossett, Jr. as John, Jon Voight as Abraham, Marcia Gay Harden as Esther, Joan Allen as Deborah, Max von Sydow as Noah, and Malcolm McDowell as Solomon.

This title is due for release on October 12, 2009
We'll send you an email as soon as it is available!