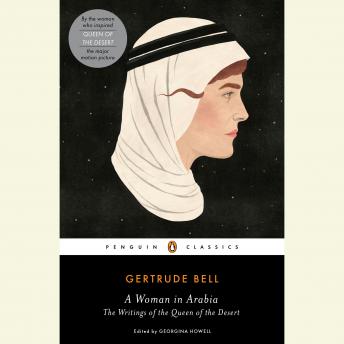 A Woman in Arabia: The Writings of the Queen of the Desert

A portrait in her own words of the female Lawrence of Arabia, the subject of the PBS documentary Letters from Baghdad, voiced by Tilda Swinton, and the major motion picture Queen of the Desert, starring Nicole Kidman, James Franco, Damian Lewis, and Robert Pattinson and directed by Werner Herzog

Gertrude Bell was leaning in 100 years before Sheryl Sandberg. One of the great woman adventurers of the twentieth century, she turned her back on Victorian society to study at Oxford and travel the world, and became the chief architect of British policy in the Middle East after World War I. Mountaineer, archaeologist, Arabist, writer, poet, linguist, and spy, she dedicated her life to championing the Arab cause and was instrumental in drawing the borders that define today’s Middle East.

As she wrote in one of her letters, “It’s a bore being a woman when you are in Arabia.” Forthright and spirited, opinionated and playful, and deeply instructive about the Arab world, this volume brings together Bell’s letters, military dispatches, diary entries, and travel writings to offer an intimate look at a woman who shaped nations.

For more than seventy years, Penguin has been the leading publisher of classic literature in the English-speaking world. With more than 1,800 titles, Penguin Classics represents a global bookshelf of the best works throughout history and across genres and disciplines. Readers trust the series to provide authoritative texts enhanced by introductions and notes by distinguished scholars and contemporary authors, as well as up-to-date translations by award-winning translators.