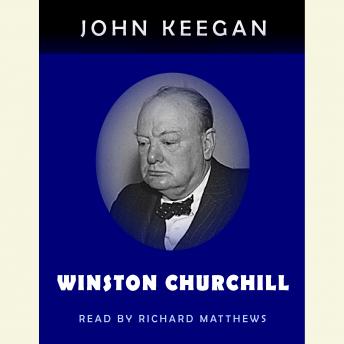 '[Keegan is] the best military historian of the world.'—Tom Clancy

When today’s world leaders require inspiration and strength in times of crisis, they often invoke Winston Churchill. The son of a member of Parliament, Churchill, a poor academic student, wanted to be a solider early in life. At this he succeeded brilliantly, fighting fearlessly on the frontiers of the British Empire but eventually being captured. His escape from a South African prison camp led him to national fame and catapulted him into a life of politics.

The eminent historian John Keegan charts Churchill's career, examining his steadfast leadership during the catastrophic events of World War II while England was dangerously poised on the brink of collapse. With wonderful eloquence, Keegan illuminates Churchill's incredible strength during this crucial moment in history and his unshakable belief that democracy would always prevail. Keegan looks at Churchill's speeches, which are some of the greatest examples of English oratory, and identifies his ability to communicate his own idea of an English past as the source of Churchill's greatness. He also sheds light on the political climate of Churchill's time. The result is an insightful, sensitive portrait of Churchill, the war leader, and Churchill, the man.

This title is due for release on August 27, 2002
We'll send you an email as soon as it is available!