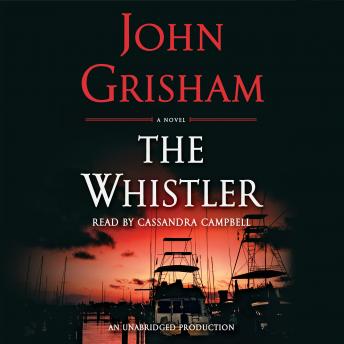 #1 of The Whistler (Grisham)

#1 NEW YORK TIMES BEST SELLER • A high-stakes thrill ride through the darkest corners of the Sunshine State, from the author hailed as “the best thriller writer alive” by Ken Follett

We expect our judges to be honest and wise. Their integrity and impartiality are the bedrock of the entire judicial system. We trust them to ensure fair trials, to protect the rights of all litigants, to punish those who do wrong, and to oversee the orderly and efficient flow of justice.

But what happens when a judge bends the law or takes a bribe? It’s rare, but it happens.

Lacy Stoltz is an investigator for the Florida Board on Judicial Conduct. She is a lawyer, not a cop, and it is her job to respond to complaints dealing with judicial misconduct. After nine years with the Board, she knows that most problems are caused by incompetence, not corruption.

But a corruption case eventually crosses her desk. A previously disbarred lawyer is back in business with a new identity. He now goes by the name Greg Myers, and he claims to know of a Florida judge who has stolen more money than all other crooked judges combined. And not just crooked judges in Florida. All judges, from all states, and throughout U.S. history.

What’s the source of the ill-gotten gains? It seems the judge was secretly involved with the construction of a large casino on Native American land. The Coast Mafia financed the casino and is now helping itself to a sizable skim of each month’s cash. The judge is getting a cut and looking the other way. It’s a sweet deal: Everyone is making money.

But now Greg wants to put a stop to it. His only client is a person who knows the truth and wants to blow the whistle and collect millions under Florida law. Greg files a complaint with the Board on Judicial Conduct, and the case is assigned to Lacy Stoltz, who immediately suspects that this one could be dangerous.

Dangerous is one thing. Deadly is something else.

I enjoyed the audio book but did not much care for the narrator; her different character voices were hard to follow for me.

Excellent story and narration. Technical side of the production was annoying, as the bookmarks were always off by 30-60 sec from where I set them, and sometimes they didn't even get registered at all.

Great story, however it was a bit slow in spots.

It was enjoyable read. The book was well written and it held my attention.

Loved the book. Intriguing without unwelcome gratuitous scare or sex. I'm almost never disappointed in a John Grisham book. The narrator was a bit awkward with the different voices in the beginning and a few pronunciations were off, but she quickly smoothed out and was over all a good narrator. Very enjoyable audio book experience.

The book was ok. I had a hard time listening to the narrator trying too hard to have a sexy voice. It took away from the story.

Very good. I had a hard time shutting it off when I should be doing something else. Good story, and good narration.

I enjoyed the book however it was drawn out then wrapped up so quickly at the end! It went from zero to sixty!

I thought the narrator did not speak clearly, so it made the book not enjoyable

I sometimes have a slow time warming up to a book, but once I get all of the characters down, and the action starts, it becomes pretty good. This book is like that! I have read over 30 audiobooks, and this is top 5. It would be nice, though, to have Audiobooks.com to give me a list of John Grisham books to read in order. I know he is good at developing characters throughout different books.

Wish there was more books, miss this reader.

Loved the story - couldn’t put it down. Good narrator too. I haven’t listened to a John Grisham novel in awhile. Now I want to find another!

i really enjoyed it. I have listen to most of John Grisham books. I see the new ones.

The book held my attention, but the last 20% or so is unremitting exposition. It's sloppy storytelling, but I guess when you're John Grisham you can get away with it.

As a Grisham fan, was a little disappointed in this read. Started out with a bang, but fizzled as it went on...to many minor characters piling up to keep track of. But...being a Grisham book, still enjoyed it! The narration was awful. The woman's attempt at male voices came across weird and nasaly. Pretty distracting.

Loved the narration and have always enjoyed Grisham’s books

Sorry to say, I really didn't care for this book. I don't feel like any of the characters were well developed and I didn't care what happened to any of them. I normally enjoy John Grisham but this one just missed the mark for me.

Loved it thoroughly! Was my first full audio book listen and I couldn't turn it off!

I love anything and everything that John Grisham writes! Awesome!

Excellent, good twists and turns all the way to the end...

Both book and narration were very well done. I liked how the narrator changed her tone for the different people. Kept me very much awake throughout part of an 18hr drive. I recommend it!

Good book and narrator. The ending wrapped up a little too tidily for me.

Book and narrator was excellent.

This was my first audio book. I did enjoy it while driving, but I also listened at home. It was very good. I heard there was a sequel to it. Brethern? The book kept you wanting more.

I enjoyed hearing Grisham as I drove to and from work narrated by a lovely voice. Well done.

The narrator has a beautiful lilting voice that is great to listen to. I don't think this is Grisham's best work.

Enjoyed, listening while I work, I love listening to books while I do things around the house In the am, after I listen to the news, listening to a good book helps take the edge off the mostly negative news and get me in a better mood to go out into the world ????

I enjoyed it. Not my favorite Grisham novel but good!

Book is excellent but the narrator's different voices for the different characters was not very good at all especially the men characters. They all tended to sound the same. She might be better served just to read the story and not try to change voices.

Very good book, however I did not like the Narrator.

Narrator had a pleasant voice which did not distract from the actual story. As always I enjoyed Grisham's writing style and original story.

Narrator sounds like Siri. Not much inflection or real emotion in her voice. A pleasant voice, albeit robotic.

its a good book don't get me wrong but it kinda goes flat. expecting a really good ending and it ends like a news report. i like the narrator if she did better books id enjoy it more.

Very good story, like others I didn't care for the narrators "man voice".

This book was not my favorite of John Grisham

I love the book! It was very entertaining and had a nice pace to the story. I really enjoyed the characters and the narrator did a fantastic job.

I thought the book was good, but I did not care for the narrator. Her voice did not work well for the male parts and seemed disconnected at times. She was good for most of the female characters. Overall a good listen.

I thought it was very well written and told just right.

A good listen, finished it in two days. I look forward to many more.

I really enjoyed this book. It was captivating and the story line kept me engaged to the very end. The narrator was perfect.

This book rambles on for at least 10 chapters too long. The first two thirds are interesting, but it is almost like he has material or ideas for two more stories so he just adds them to this one". Very disappointing

Good read not one of the best but I will always look for his next book!

Narration was awful. She sounded like a dumb little kid. My five year old could have done a better job. The story was ok but well below Grisham's standards. All in all of serious waste of time.

Awesome book and narrative voice. I liked the fact that the voice wasn't monotone. I was driving and liked the book.

The book was decent; not one of Grishan's best, but interesting enough .... The narrator,, not so much. Her voice was awful and the "voices" she attributed to the characters all sounded the same. The general story reading voice actually put me to sleep ... I am just glad I wasn't driving at the time!

Great book. Couldn't put it down!

Grisham is a hyper masculine author. asking a woman to narrate this novel was a mistake. Even so, the narration was very poor. This was my first Audiobook. Another experience like this one and I will be dropping my subscription.

Surprisingly slow and uninteresting. Wondering if Grisham really wrote it since it's not close to his usual caliber. Good narration, though!

The story is fun to listen to and holds your interest. Not too keen on the narrator's voice changes for the different characters.

Great book! There's a great twist and then it's so suspenseful!

This did not read like a John Grisham novel. I find it difficult to believe he even wrote it. It was so incredibly boring in my opinion. The story lacked any kind of intrigue or suspense. I kept expecting there to be a twist or something unexpected, but unfortunately it remained predictable. The narrator was terrible. The change in voices to male was pathetic. It was hard to listen to. I came very close to discontinuing the audiobook because of it. It was cringeworthy at points. John Grisham can afford a better narrator?? I would not recommend this audiobook at all.

Enjoyed the book but it lost its pizzaz in the last 20percent when I thought something Unexpected was going to happen.

Yikes John! I hate it when prolific writers churn it out as opposed to crafting great works.

Great book! The story moved along at a good clip, held my interest. It is one of Grisham's best books in recent years. The narrator was very good.

I love the book. The narrator not so much. But I am a John Grisham fan. The reason I don't care for the narrator is I don't like her voice when she tries to sound like a man.

This was an excellent book, John Grisham's usual standard. Narration was great.

This story kept me listening and not fast forwarding. I loved it.

This title is due for release on October 25, 2016
We'll send you an email as soon as it is available!