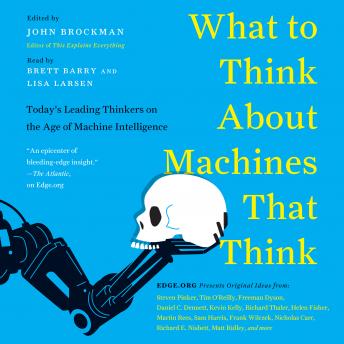 What to Think About Machines That Think: Today's Leading Thinkers on the Age of Machine Intelligence

Weighing in from the cutting-edge frontiers of science, today’s most forward-thinking minds explore the rise of “machines that think.”

Stephen Hawking recently made headlines by noting, “The development of full artificial intelligence could spell the end of the human race.” Others, conversely, have trumpeted a new age of “superintelligence” in which smart devices will exponentially extend human capacities. No longer just a matter of science-fiction fantasy (2001, Blade Runner, The Terminator, Her, etc.), it is time to seriously consider the reality of intelligent technology, many forms of which are already being integrated into our daily lives. In that spirit, John Brockman, publisher of Edge. org (“the world’s smartest website” – The Guardian), asked the world’s most influential scientists, philosophers, and artists one of today’s most consequential questions: What do you think about machines that think?

What to Think About Machines That Think: Today's Leading Thinkers on the Age of Machine Intelligence