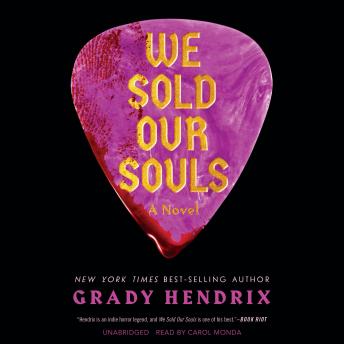 We Sold Our Souls

In this hard-rocking, spine-tingling supernatural thriller, the washed-up guitarist of a ’90s heavy metal band embarks on an epic road trip across America and deep into the web of a sinister conspiracy.

Grady Hendrix, horror writer and author of Paperbacks from Hell and My Best Friend’s Exorcism, is back with his most electrifying novel yet. In the 1990s, heavy metal band Dürt Würk was poised for breakout success—but then lead singer Terry Hunt embarked on a solo career and rocketed to stardom as Koffin, leaving his fellow bandmates to rot in obscurity.

Two decades later, former guitarist Kris Pulaski works as the night manager of a Best Western—she’s tired, broke, and unhappy. Everything changes when a shocking act of violence turns her life upside down, and she begins to suspect that Terry sabotaged more than just the band.

Kris hits the road, hoping to reunite with the rest of her bandmates and confront the man who ruined her life. It’s a journey that will take her from the Pennsylvania rust belt to a celebrity rehab center to a music festival from hell. A furious power ballad about never giving up, even in the face of overwhelming odds, We Sold Our Souls is an epic journey into the heart of a conspiracy-crazed, pill-popping, paranoid country that seems to have lost its very soul … where only a lone girl with a guitar can save us all.

Another great offering from Grady Hendrix. As in My Best Friend's Exorcism, he delicately walks the line between having something to say--in this case, about the surveillance state, soul-sucking corporate power, and the redeeming potential of inspiration and honest art--and not taking taking himself or his characters too seriously. And the terror and the gore always work because they are integral to a compelling story. The gritty voice of the narrator fits perfectly with the main character, and she does a great job conveying emotion and terror. Her range doesn't quite allow for distinct voices for different characters, especially the men, but that is not a huge drawback. In a way, it fits with the story.

I listened to the book "My Best Freinds Exersum" written by the same author and loved it. I thought I would listen to more books written by him. The book itself is not all that bad & I'm a heavy metal fan, so I could really get down with the metal aspect of this book. I do like it wasn't the same old bs about selling your soul and how the author put a much-needed spin on it. (Well Done) However, the narration was not so good. It most definitely wasn't the worst I've heard, but it was lacking in some aspects. So, as my grandmother would say "It's like your draws, it's up to ya." :)

This narrator sounds like she smokes 10 packs a day. Listen to the preview before you buy. The story is ok.

This title is due for release on September 18, 2018
We'll send you an email as soon as it is available!