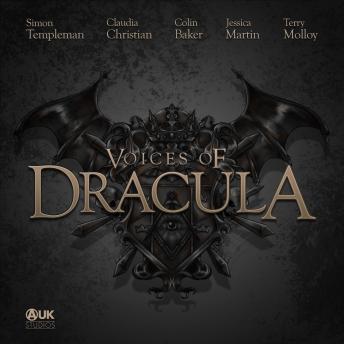 In writing Dracula, Bram Stoker created a universe full of rich characters, dark and foreboding locations, and a tangled web of loyalties, relationships and motivations. Despite the story being fictional - at least one hopes that's the case - many elements within the story were reflections and analogies of the Stoker family and their history.
A little over 120 years after the book's original release, Bram's great-grandnephew Dacre Stoker has teamed up with author Chris McAuley to create a series of short stories set within the StokerVerse, each narrated from the point of view of one of the characters we all know - or think we know - so well.
Narrated by some of the leading voice actors of today, Stoker's short stories are dark, twisted and of course hugely entertaining. Simon Templeman (Legacy of Kain, Dragon Age, Dead Space 3, Charmed and so much more) plays Dracula with all the expertise and finesse one would expect from such a lauded performer, whilst Claudia Christian (Babylon 5, 9-1-1, Disney's Atlantis: The Lost Empire) is the mysterious Thief. TV's sixth Doctor Colin Baker (Doctor Who, Kingdom, Hustle) masterfully narrates vampire hunter Van Helsing's stories whilst Terry Molloy - most famous for playing the Doctor's on-screen nemesis Davros - takes the part of Renfield. Jessica Martin (Doctor Who, The Sandman) completes the line-up as Mina Harker.
If you're a fan of vampires - particularly those of a more gothic nature - then these brand-new adventures will surely appeal to you. With Dacre Stoker's major contribution, these stories are the most significant addition to the official Dracula canon since Francis Ford Coppola's 1992 film Bram Stoker's Dracula.