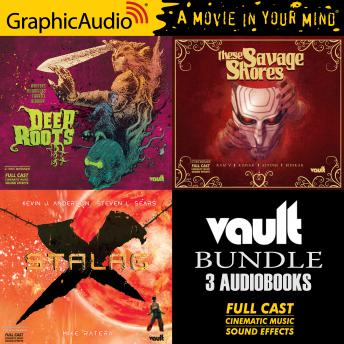 'A bundle of three Vault Comics adapted directly from the graphic novels and produced with a full cast of actors, immersive sound effects and cinematic music.

Deep Roots:
There is a green and blooming world beyond our own, fighting back against the human pollutant. This cruel Otherworld is unknowable. Yet, if we are to survive, we must rescue it from our history. Should we fail, more than cities will fall.

These Savage Shores:
In 1766 an insatiable vampire sails from London to the Malabar Coast, aboard an East India Company ship. But along the shores of the Indus lurk darker and more ancient powers, and a war is brewing in the night.

Stalag-X:
Joe Human?is taken to a harsh P.O.W. camp on a distant planet where he will be examined, tortured, and forced to endure experiments that rip into his very mind, as the alien Krael seek to answer the question: What is human? '