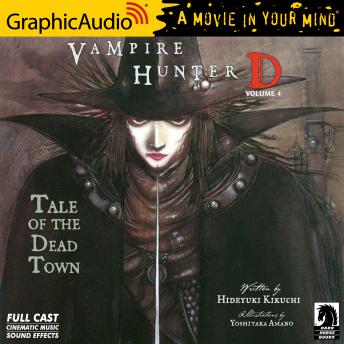 'When a floating city becomes the target of a rash of vampire attacks, only one man can restore the oasis.

''The City,'' a tiny metropolis of a few hundred sheltered citizens floating serenely on a seemingly random course a few feet above the ground, has long been thought safe from the predation of marauding monsters. It seemed like a paradise.

A paradise shattered when an invasion of apparent vampires threatens the small haven. While the Vampire Hunter known only as ''D'' struggles to exterminate the scourge, a former denizen of the city, the attractive Raleigh Knight, and the brash John M. Brassalli Pluto VIII seize control of the city lurching it onto a new and deadly course. D's travails are just beginning.

This title is due for release on July 1, 2022
We'll send you an email as soon as it is available!