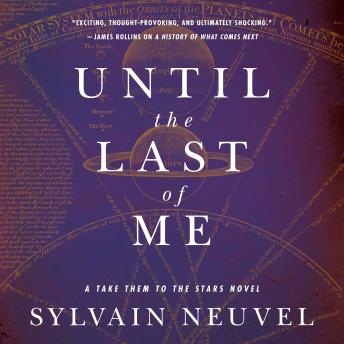 Until the Last of Me: Take Them to the Stars, Book Two

#2 of Take Them to the Stars

Sylvain Neuvel's Until the Last of Me is a darkly satirical first contact thriller, as seen through the eyes of the women who make progress possible and the men who are determined to stop them.

Always run, never fight.
Preserve the knowledge.
Survive at all cost.
Take them to the stars.

After nudging the human race through the dawn of rocket technology, Mia finds herself about to help launch the first people into space. She can't take them to the stars, not quite yet, but she's getting them ever closer...

But a terrible adversary is upon her, threatening the future of two species...

A Macmillan Audio production from Tor.com

This title is due for release on March 29, 2022
We'll send you an email as soon as it is available!