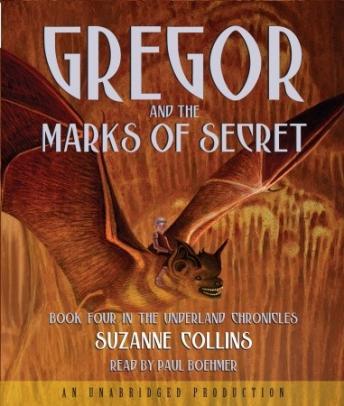 The Underland Chronicles Book Four: Gregor and the Marks of Secret

In the fourth volume of the critically acclaimed Underland Chronicles, Gregor is drawn ever deeper into a brewing crisis. For generations, rats have run the mice–or “nibblers”–out of whatever lands they’ve claimed, keeping them constantly on the move. But now the mice are disappearing, and the young queen Luxa, who credits them with saving her life, is determined to ﬁnd out why.

When Gregor joins her on a fact-ﬁnding mission, he’s relieved that this time, at least, there’s no prophecy on the line. But when the true fate of the mice is revealed, it is something far more sinister than Gregor or Luxa have imagined–and it points the way to the ﬁnal prophecy he has yet to fulﬁll. Gregor’s role as warrior and his abilities as a rager are put to the test in this suspenseful, action-packed penultimate installment of Suzanne Collins’s thrilling Underland Chronicles.

Underland Chronicles Book Four: Gregor and the Marks of Secret

This title is due for release on May 13, 2008
We'll send you an email as soon as it is available!