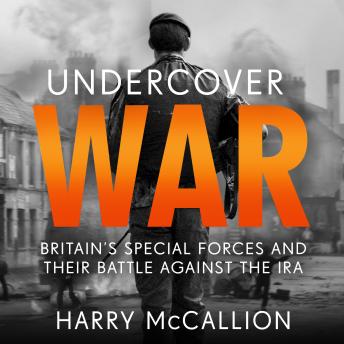 Undercover War: Britain's Special Forces and their secret battle against the IRA

When British troops first deployed to Northern Ireland in 1969 to keep apart rioting factions of loyalists and nationalists, they could not have known that they were being drawn into the longest campaign in the British Army's history, a battle against the threat of a new rising force - the Provisional Irish Republican Army.

While patrols, vehicle bombs and incendiary speeches are the defining memories of the Troubles, the real war was fought out of sight and out of mind. For thirty years, Britain's Special Forces waged a ferocious, secretive struggle against a ruthless and implacable enemy.

Harry McCallion's deep experience across the theatre of Northern Ireland offers a unique insight into nearly every major military action and operation in the Province. Having served seven tours with the Parachute Regiment, undergone selection for 14 Intelligence Company, completed six years with the SAS - including two tours with their anti-terrorism team - and received two commendations for bravery during service with the Royal Ulster Constabulary, there are few more qualified to tell this astonishing story.

This book is his blistering account of the history of Britain's war against the IRA between 1970 and 1998. From new insights into high-profile killings and riveting accounts of enemy contact, to revelations about clandestine missions and the strategies used in combating a merciless enemy, Undercover War is the definitive inside story of the battle against the IRA, one of the most dangerous and effective terrorist organisations in recent history.

Undercover War: Britain's Special Forces and their secret battle against the IRA

This title is due for release on August 6, 2020
We'll send you an email as soon as it is available!