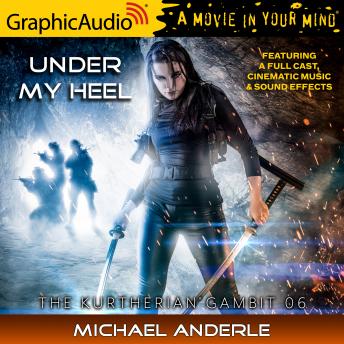 Under My Heel [Dramatized Adaptation]: The Kurtherian Gambit 6

'Europe is erupting in tension and violence.

David is only adding to the conflagration by setting a trap, one our team will trip to save those people still alive.

There is one thing every enemy of Bethany Anne finds out: they will be ground under her heels.

Now, something is heating up between Bethany Anne and Michael, and it isn’t her anger over him leaving her behind.

Further, the Patriarch is learning there might be someone worth sticking around for in his future.

If she would just stop being so hard-headed.

David believes he is smarter than the rest. Now, he must fight both the Patriarch and the Queen Bitch.

Are his days numbered?