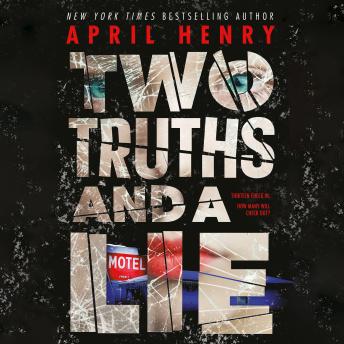 Two Truths and a Lie

A group of teens are trapped in an old motel with a murderer in this chilling YA mystery by New York Times bestselling author April Henry.

Nell has always wanted to be an actor, but doubts her ability. As a member of her school’s theater program, she prefers working backstage. On the way to a contest, an unexpected blizzard strands her acting troupe in a creepy motel. Soon they meet a group of strangers from another high school—including the mysterious and handsome Knox, who insists they play the game Two Truths and a Lie. When it’s Nell’s turn, she draws a slip of paper inked in unfamiliar handwriting:


I like to watch people die.
I’ve lost count of how many people I’ve killed.


Suddenly a night of harmless fun turns into a matter of life and death. As guests go missing, it becomes clear that a murderer is hiding in their midst ready to strike again. In a room full of liars and performers, the truth is never quite what it seems. Nell is going to have to act like her life depends on it—because it does.

This title is due for release on May 24, 2022
We'll send you an email as soon as it is available!