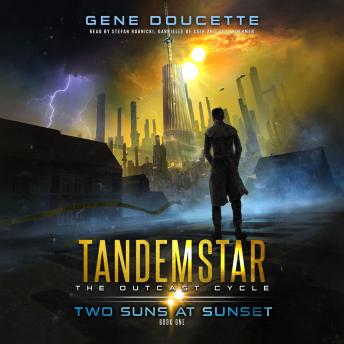 #1 of Tandemstar: The Outcast Cycle

Dib is an Earthlike planet, only slightly smaller, with shorter days and longer years, in orbit around twin suns.

On the continent of Geo, in the city of Velon in the nation of Inimata, a man lies dead in his study.

In life, Professor Orno Linus was a world-class scholar: an astrophysicist, a dead-language linguist, and an expert in (and apparent true believer of) the religious concept of the Cull, i.e., the end of the world. Widely respected, nothing about Linus’s expertise suggests somebody might want him dead.

Professor Linus is also Brother Linus, a high-ranking member of an ancient, powerful religious organization known as the House. This makes his murder much more complicated, but no more explicable, because murder on House grounds just doesn’t happen. Not even when one of the last things the victim did was steal something important from the House vault.

Finally, Orno is also the younger brother of Calcut Linus, one of the most powerful and criminally dangerous people on the planet. Killing any Linus means incurring the wrath of a man for whom laws very rarely apply.

And yet, somebody killed him.

Detective Makk Stidgeon already knows he’s unlucky. He’s a cholem: an outcast. A bad-luck charm. He was born this way, and has the brand on his wrist to prove it.

But in terms of bad luck, the gods have really gone overboard by sticking him with the Linus case.

Between a House leadership that seems more interested in retrieving their stolen artifact than in solving the murder of one of their own, the demands of the murderous Calcut Linus, a new partner who seems to know more than she’s telling, and an omnipresent news media constantly looking for an angle on the biggest story of the year, Makk barely has time to just follow the clues.

And that’s before an impossible video surfaces that purports to reveal the killer’s identity. What makes it impossible? The person in the video couldn’t have possibly done it.

To get to the bottom of the Orno’s murder, Makk will have to navigate between the House and the Linus family, find the source of the video, and figure out what’s missing from the House vault. Even if he can pull all that off, he may discover he’s not at the end of a mystery at all, but at the beginning of a much larger one.