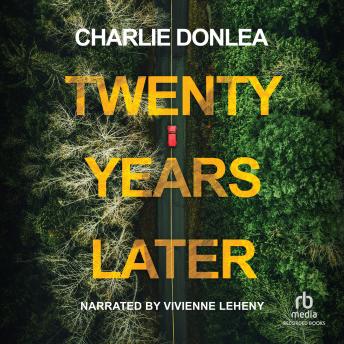 Fans of Lisa Unger and Allen Eskens won’t want to miss this thrilling new suspense novel from the #1 internationally bestselling author of The Girl Who Was Taken! Hiding her own dark past in plain sight, a TV reporter is determined to uncover the truth behind a gruesome murder decades after the investigation was abandoned. But TWENTY YEARS LATER, to understand the present, you need to listen to the past…

Avery Mason, host of American Events, knows the subjects that grab a TV audience’s attention. Her latest story—a murder mystery laced with kinky sex, tragedy, and betrayal—is guaranteed to be ratings gold. New DNA technology has allowed the New York medical examiner’s office to make its first successful identification of a 9/11 victim in years. The twist: the victim, Victoria Ford, had been accused of the gruesome murder of her married lover. In a chilling last phone call to her sister, Victoria begged her to prove her innocence.

Emma Kind has waited twenty years to put her sister to rest, but closure won’t be complete until she can clear Victoria’s name. Alone she’s had no luck, but she’s convinced that Avery’s connections and fame will help. Avery, hoping to negotiate a more lucrative network contract, goes into investigative overdrive. Victoria had been having an affair with a successful novelist, found hanging from the balcony of his Catskills mansion. The rope, the bedroom, and the entire crime scene was covered in Victoria’s DNA.

But the twisted puzzle of Victoria’s private life is just the beginning. And what Avery doesn't realize is that there are other players in the game who are interested in Avery’s own secret past—one she has kept hidden from both the network executives and her television audience. A secret she thought was dead and buried . . .

Accused of a brutal murder, Victoria Ford made a final chilling call from the North Tower on the morning of 9/11.
Twenty years ago, no one listened.
Today, you will.
TWENTY YEARS LATER, to understand the present, you need to listen to the past...

Well the second book I've read..what a story love the twist at the end .

It had a slow start, but picked up and had tons of twists!

I just kept waiting to really enjoy the story because it seemed like something I should enjoy, but I think the characters just weren't fleshed out enough, and because there were so many stories in the story that none of them were told well enough. Also, the reader was just mediocre. BUT at least I did finish listening to it and that is something.

Awesome twist at end. I had to go back several chapters to rethink it!

One of my all time favorite books! Loved it!!

This title is due for release on December 28, 2021
We'll send you an email as soon as it is available!