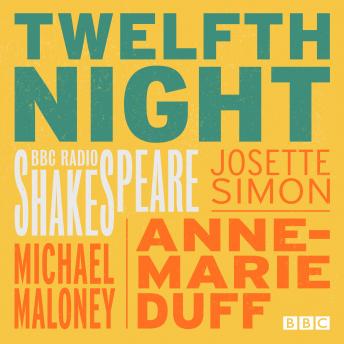 In this BBC full-cast production of Twelfth Night, Malvolio is looking for trouble - and revenge...

Michael Maloney, Josette Simon and Anne-Marie Duff star in this fast and funny production of Shakespeare's most sparkling and optimistic comedy, when all the world is turned on its head and authority is usurped, when by civil misrule girls become boys and women lust after women.

BBC radio has a unique heritage when it comes to Shakespeare. Since 1923, when the newly-formed company broadcast its first full-length play, generations of actors and producers have honed and perfected the craft of making Shakespeare to be heard.

In this acclaimed BBC Radio Shakespeare series, each play is introduced by Richard Eyre, former Director of the Royal National Theatre. Revitalised, original and comprehensive, this is Shakespeare for the modern day.