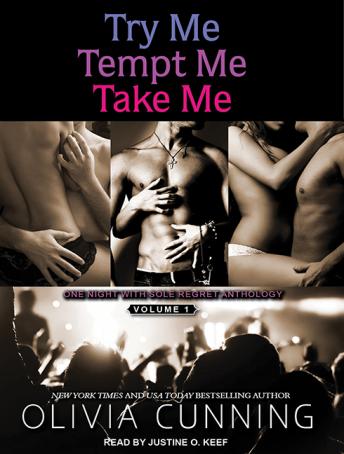 Try Me, Tempt Me, Take Me: One Night with Sole Regret Anthology

#1 of One Night with Sole Regret Anthology

For the five rock gods of Sole Regret, finding love is easy, keeping it is hard. This anthology contains the first three novellas in the One Night with Sole Regret series.

In Try Me, Sole Regret's crafty drummer, Gabe 'Force' Banner, seduces a straight-laced accountant before she realizes she's talking to a rock star. In Tempt Me, Sole Regret's troubled lead guitarist, Adam Taylor, might finally be ready to commit to the woman who saved him from a life of despair and abuse. In Take Me, Sole Regret's enigmatic vocalist, Jacob 'Shade' Silverton, tries to keep his cool around one off-limits woman from his past, but she just might be too hot to resist.

This title is due for release on July 31, 2013
We'll send you an email as soon as it is available!