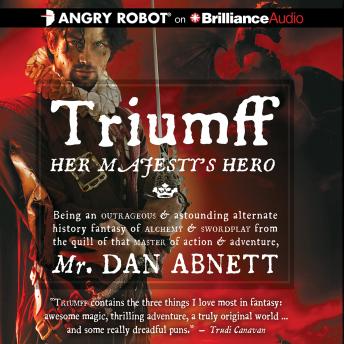 It is the year 2010. Her Divine Majesty, Queen Elizabeth XXX sits upon the throne. Great Britain’s vast Empire is run by alchemy and superstition. Now Sir Rupert Triumff, dashing swordsman, has uncovered a vile plot to dethrone her glorious majesty. For the honour of the nation: to arms!Multi-million selling author Dan Abnett whips up a furious maelstrom of incredible swordfights, wild invention and truly outrageous jokes. “Triumff is a witch’s brew of alternate history, hocus pocus, cracking action and cheesy gags. Reads like Blackadder crossed with Neal Stephenson. It’s a Kind of Magick—don't miss it.” —Stephen Baxter, esq.“Endlessly inventive, joyously irreverent, drenched with adrenaline and wicked humour, Dan Abnett’s Triumff: Her Majesty’s Hero is a brilliant occult-comedy-historical-adventure that’s true to the best traditions of the genres it so eagerly devours.” —Mike Carey, esq.

This title is due for release on October 11, 2011
We'll send you an email as soon as it is available!