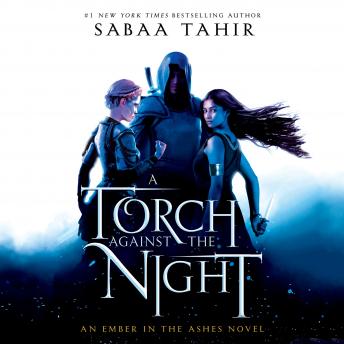 A Torch Against the Night

#2 of An Ember in the Ashes

“Fresh and exciting...Tahir has shown a remarkable talent for penning complex villains.”—A.V. Club


Set in a rich, high-fantasy world inspired by ancient Rome, Sabaa Tahir's AN EMBER IN THE ASHES told the story of Laia, a slave fighting for her family, and Elias, a young soldier fighting for his freedom.

Now, in A TORCH AGAINST THE NIGHT, Elias and Laia are running for their lives.

After the events of the Fourth Trial, Martial soldiers hunt the two fugitives as they flee the city of Serra and undertake a perilous journey through the heart of the Empire.

Laia is determined to break into Kauf—the Empire’s most secure and dangerous prison—to save her brother, who is the key to the Scholars' survival. And Elias is determined to help Laia succeed, even if it means giving up his last chance at freedom.

But dark forces, human and otherworldly, work against Laia and Elias. The pair must fight every step of the way to outsmart their enemies: the bloodthirsty Emperor Marcus, the merciless Commandant, the sadistic Warden of Kauf, and, most heartbreaking of all, Helene—Elias’s former friend and the Empire’s newest Blood Shrike.

Bound to Marcus's will, Helene faces a torturous mission of her own—one that might destroy her: find the traitor Elias Veturius and the Scholar slave who helped him escape...and kill them both.

This is definitely worth you time. It expands the world and characters we've been following since the first book.

Loved this audiobook, the voices are amazing. I've started talking in their accent too. It sounds so sophisticated.

It was very nicely written and told in a way to make you feel you know the characters. I can't wait for the next book!

Amazing story. Had me on the age of my seat the whole time.

Aaaahh!! This book is magnificent! I'm always apprehensive about sequels; it seems that even if they're great, they can usually never measure up to the first book. This one, however, blows my theory straight out of the water. Sabaa Tahir ties up some loose ends, gives the reader plenty of shock & wow moments, raises some new, intriguing questions, all the while keeping the story so visceral, so nail-bitingly suspenseful at times that I literally HAD to stop and take a minute to tell myself that I really COULD withstand whatever she threw at me next! The 3 narrators are superb!

This title is due for release on August 30, 2016
We'll send you an email as soon as it is available!