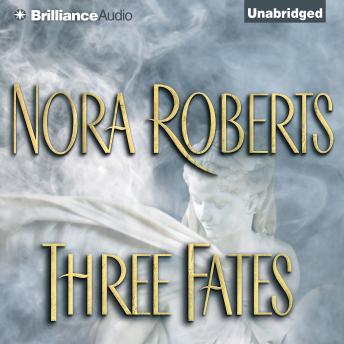 When the Lusitania sank, one survivor became a changed man, giving up his life as a petty thief—but keeping the small silver statue he lifted, a family heirloom to future generations. Now, nearly a century later, that priceless heirloom, one of a long-separated set of three, has been stolen.

Malachi, Gideon, and Rebecca Sullivan are determined to recover their great-great-grandfather’s treasure, reunite the Three Fates, and make their fortune. Their quest will take them from their home in Ireland to Helsinki, Prague, and New York where they will meet a brilliant scholar who will aid them in their hunt—and an ambitious woman who will stop at nothing to acquire the Fates….

Always enjoy Nora Roberts' and this one was no exception.

Nora Roberts has such a way with her characters you would swear they were real. The narrator is excellent.

I have not read a Nora Roberts' book in years and now I am hooked again! I can't wait to read another one of her books since I thoroughly enjoyed listening to "The Three Fates". I loved all of the characters and I thought the narration brought the story to life. Fun and fast read!

Really great story. Individually each character was perfect, together they were a force. I loved it!

wasn't sure if I was going to like this book are first but about 40 mins in and I was well and truly hooked. will deffo be reading it again

I thought it was a good read and liked the narration but it was a little predictable.

Since the story line appeared to be a bit choppy, I would assume that this was a disjointed abridgement. There are better Nora Roberts' stories to listen to or get the unabridged version of this story.