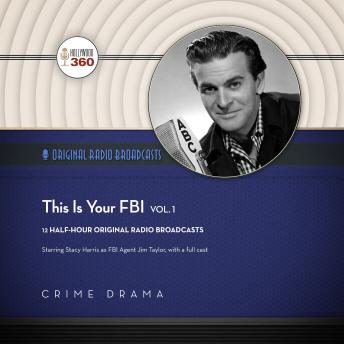 This Is Your FBI, as the title suggests, was a crime drama that featured true cases from the FBI and was told from an agent's viewpoint. The show's producer and director, Jerry Devine, had once worked for the FBI, so having him for the show would allow each story to be told in the best way possible. J. Edgar Hoover, who was the chief of the FBI at the time, gave it his endorsement, calling it "the finest dramatic program on the air," and gave Devine access to the FBI files for the stories used in the show.
The show's main character was Agent Jim Taylor, who handled crime cases on the West Coast. Each thirty-minute episode allowed for the presentation of the criminal's actions, followed up with Taylor's investigation of the crime. This long-running series starred Frank Lovejoy (and later Dean Carlton and William Woodson) as the narrator, Betty White, and Stacy Harris.
Episodes included are: "The Serviceman's Fraud," "The Desert Dictator," "The Unwelcome Guest," "The Sinister Souvenir," "The Cautious Killer," "The Corrupt City," "The Pan American Patriots," "The Castaway Killer," "The Paroled Killer," "The Delinquent Parents," "The Nylon Hijacker," and "The Singing Swindler."