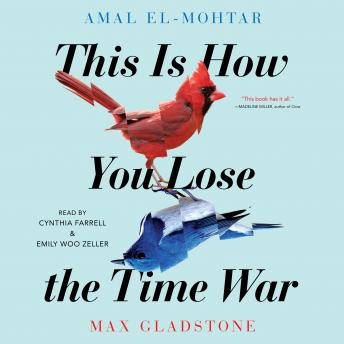 This Is How You Lose The Time War

From award-winning authors Amal El-Mohtar and Max Gladstone comes an enthralling, romantic novel spanning time and space about two time-traveling rivals who fall in love and must change the past to ensure their future.

Among the ashes of a dying world, an agent of the Commandment finds a letter. It reads: Burn before reading.

Thus begins an unlikely correspondence between two rival agents hellbent on securing the best possible future for their warring factions. Now, what began as a taunt, a battlefield boast, becomes something more. Something epic. Something romantic. Something that could change the past and the future.

Except the discovery of their bond would mean the death of each of them. There’s still a war going on, after all. And someone has to win. That’s how war works, right?

Cowritten by two beloved and award-winning sci-fi writers, This Is How You Lose the Time War is an epic love story spanning time and space.

This book was so good. You're gonna love it or hate it, and I loved it. So much. Something about listening to this – having these words whispered in my ears – changes the whole experience.

This title is due for release on July 16, 2019
We'll send you an email as soon as it is available!