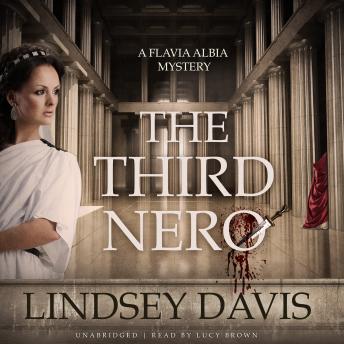 #5 of The Flavia Albia Mysteries

Intrigue—and possibly treason—swirl around the hall of power in Rome when yet another Nero pretender emerges to challenge the Emperor.

In the year AD 90, following the Saturninus revolt in Germany, the Emperor Domitian has become more paranoid about traitors and dissenters around him. This leads to several senators and even provincial governors facing charges and being executed for supposed crimes of conspiracy and insulting the emperor. Wanting to root out all the supports of Saturninus from the Senate, one of Domitian’s men offers to hire Flavia Albia to do some intelligence work.

Flavia Albia, daughter and chip off the old block of Marcus Didius Falco, would rather avoid any and all court intrigue, thank you very much. But she is in a bit of a bind. Her wedding is fast approaching, her fiancé is still recovering—slowly—from being hit by a lightning bolt, and she is the sole support of their household. So with more than a few reservations, she agrees to “investigate.”

Adding to the confusion is yet another Nero pretender who has shown up in Parthia and is trying to rally support for his claim for the throne. With intrigue upon intrigue swirling around the capital city, it’s up to Albia to uncover what is—and isn’t—the real threat.

This title is due for release on July 11, 2017
We'll send you an email as soon as it is available!