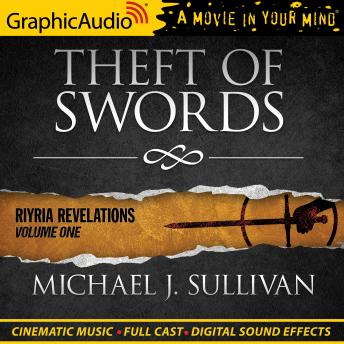 Theft of Swords contains The Crown Conspiracy and Avempartha, books 1 and 2 of Riyria Revelations.

The Crown Conspiracy is the first book in the captivating Riyria Revelations. THEY KILLED THE KING. THEY PINNED IT ON TWO MEN. THEY CHOSE POORLY
There is no ancient evil to defeat, no orphan destined for greatness, just two guys in the wrong place at the wrong time. Royce Melborn, a skilled thief, and his mercenary partner, Hadrian Blackwater make a profitable living carrying out dangerous assignments for conspiring nobles until they become the unwitting scapegoats in a plot to murder the king. Sentenced to death, they have only one way out...and so begins this tale of treachery and adventure, sword fighting and magic, myth and legend.

Avempartha is the second of a six book series entitled the Riyria Revelations. THE SECRET IS IN THE TOWER. THE PROBLEM IS THE BEAST. THE ANSWER IS TWO THIEVES.
When a destitute young woman hires Royce and Hadrian to help save her remote village from nocturnal attacks, they are once more drawn into the schemes of the wizard Esrahaddon. While Royce struggles to breech the secrets of an ancient elven tower, Hadrian attempts to rally the villagers to defend themselves against the unseen killer. Once more, what begins with the simple theft of a sword places the two thieves at the center of a firestorm -- but this time the outcome could change the future of Elan.