The Iron Hand of Mars 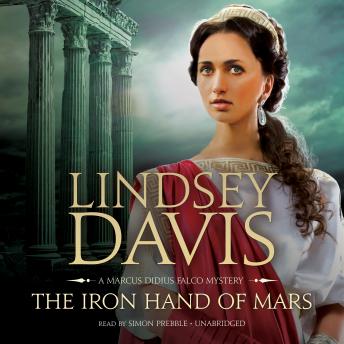 When Germanic troops in the service of the empire begin to rebel, and a Roman general disappears, Emperor Vespasian turns to the one man he can trust: Marcus Didius Falco, a private informer whose rates are low enough that even the stingy Vespasian is willing to pay them.

To Falco, an undercover tour of Germany is an assignment from Hades. On a journey that only a stoic could survive, Falco meets with disarray, torture, and murder. His one hope: in the northern forest lives a powerful Druid priestess who perhaps can be persuaded to cease her anti-Rome activities and work for peace—which Falco is eagerly hoping for as, back in Rome, Titus Caesar is busy trying to make time with Helena Justina, a senator’s daughter and Falco’s girlfriend.

The Iron Hand of Mars