The Graveyard of the Hesperides 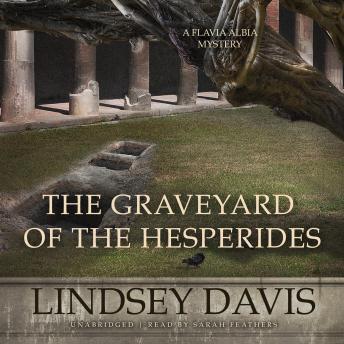 Rome, August AD 89. Flavia Albia, the daughter of Marcus Didius Falco, has taken up her father's former profession as an informer. On a typical day, it's small cases-cheating spouses, employees dipping into the till-but this isn't a typical day. Her beloved, the plebeian Manlius Faustus, has recently moved in and decided that they should get married in a big, showy ceremony as part of beginning a proper domestic life together. Also, his contracting firm has been renovating a run-down building, a bar called the Garden of the Hesperides, where they uncover human remains buried in the backyard. For years there had been rumors that the previous owner of the bar, now deceased, killed a barmaid, and these are presumably her remains. In the choice between planning a big wedding to-do and looking into a crime from long ago, Albia would much rather investigate a possible murder-or murders, as more and more remains are uncovered, revealing that something truly horrible has been going on at the Hesperides.

As Albia gets closer to the truth behind the bodies in the backyard, her investigation has put her in the crosshairs-which might be the only way she'll get out of the wedding preparations and away from all her relatives who are so very anxious to help out. "Flavia, an informer (the ancient Roman equivalent of a PI) who believes in justice above all else, sets out to identify the remains and solve a very cold case-which becomes more complex after she finds evidence of a previously unsuspected crime."-Publishers Weekly

The Graveyard of the Hesperides

This title is due for release on July 19, 2016
We'll send you an email as soon as it is available!