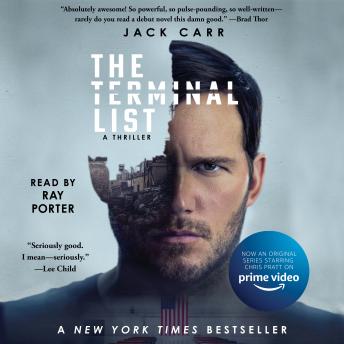 Featuring a new foreword read by the author!

“Take my word for it, James Reece is one rowdy motherf***er. Get ready!”—Chris Pratt, all around great guy and star of The Terminal List, coming to Amazon Prime

A Navy SEAL has nothing left to live for and everything to kill for after he discovers that the American government is behind the deaths of his team in this ripped-from-the-headlines political thriller that is “so powerful, so pulse-pounding, so well-written—rarely do you read a debut novel this damn good” (Brad Thor, #1 New York Times bestselling author).

On his last combat deployment, Lieutenant Commander James Reece’s entire team was killed in a catastrophic ambush. But when those dearest to him are murdered on the day of his homecoming, Reece discovers that this was not an act of war by a foreign enemy but a conspiracy that runs to the highest levels of government.

Now, with no family and free from the military’s command structure, Reece applies the lessons that he’s learned in over a decade of constant warfare toward avenging the deaths of his family and teammates. With breathless pacing and relentless suspense, Reece ruthlessly targets his enemies in the upper echelons of power without regard for the laws of combat or the rule of law.

“Told with a deft hand and a keen eye for detail, The Terminal List…is explosive and riveting” (Kevin Maurer, coauthor of No East Day) and is perfect for fans of Vince Flynn, Brad Thor, Stephen Hunter, and Nelson DeMille.

My husband and I love these kind of books. This story was captivating! Exciting and emotional. My only criticism is stop with the f—- word. Please author, use your skill as a writer of words and change up on the language

I enjoyed this read. I loved the political parallels and the protagonist's fight for justice. I think this would make a great movie!

It was definitely a thriller. Sad to say this could easily be a reality. Our present government scares me into thinking scenarios like this are very possible. Sorry to bring politics into this, but it is what it is.

Excellent novel James Reece is a great character equal to Scot Havath and Pike Logan . The narrator did a fantastic job

I liked it for the most part, but was not sure at times when reading I liked all of the killing. I think it could have been handled differently. The author Jack Carr is quite good and hope he will write another book with more mystery and intrigue.....I am sure he could.

Good plot and action suppressed by injections of obvious political leanings. Not a member of a political party. Gun owner. Ardent supporter of military and veteran services. Would have been a more powerful and persuasive read had it not been so obvious.

I give high respect to the author for his service and expertise. In spite of this books many writing flaws, the authenticity comes through, and even more, the ethos of these elite warriors shines in all of its wonderful brutality, something that's totally missing in other fiction about SEALS not told by the real men. The story is plain and simple revenge stuff about an op gone wrong, a murdered family, and a lone man with a certain set of skills. Soon enough, he's fighting, shooting, burning, and hacking his way through a long list of sleazeballs on a mostly lone path to justice. Again, I just found it less of a mind stretch to believe it all possible than say if John Grisham took on this kind of thing instead of the bonafide ex-SEAL who did write it. There's an inherent credibility here you can feel even if you don't know or care about the author's background. That being said, the book is called 'The Terminal List', and for the better part of the story after the family murder part, that's exactly what it feels like you're reading. A list. By far, and this sounds horrible to say, the best scene in the book is when the protagonist discovers his family's murder. Carr built the scene well in the preceding chapters, the thirst Reece feels to see his wife and daughter, especially after the disastrous op in the beginning. You sort of expect the tragedy to occur, but still, you know the author is giving you a glimpse into reality here, that painful longing these guys must feel to finally see the people they love after spending month after month imagining the reunion, only to never get it. So Reece is understandably tortured, and goes on a self-destructive mission to make, well, the entire world if necessary, pay for what was done to him. The writing is decent on average, but I think the author's emotional connection to the material ran out after the tragic events in the beginning, and unfortunately, so did mine. The story sort of fell off into Reece completing the list with robotic efficiency, and the writing itself became that way, robotic and somewhat formulaic, complete with tried and true phrasing and word choices you wish the editors wouldn't have allowed to get into the final draft. But whatever, this ain't supposed to be Dostoevsky. The concept, realism, and safety of the material is delivered well enough to be worth your while, but I think the show really took this book as a first draft and brought it to a much higher, more nuanced calling. Ray Porter is okay, but I was hoping for someone that sounds less like a high school math teacher and more like a blood-encrusted super-killer gutting people with a battle axe. But he did his thing as usual. All in all, the book is good, but the show is better.

This was a wonderful listen. As I was listening I thought, this may be one of the best books that I have ever read/listened to.

A good first novel but there’s a hole in the plot line towards the end (no spoilers here). We just watched the Amazon adaptation and it was better than the book in some places. But overall we enjoyed it and downloaded book two.

awesome book taking you on one hell of a ride!!

Great book, very easy listening. Has a couple of great twists and turns. The author is vey detailed but doesn’t get so carried away in the detail that a regular person gets lost in it. This book was the fastest I have ever finished an audio book!

I enjoyed the book, the writing was great, narration great. The author CLEARLY slants to the right, which is not my bent, but I could appreciate the story anyway. What amused me is how he ascribes limitations on civil liberties to liberals - when most restrictions have come from conservatives. He also justifies killing as a necessary evil with no nod to any other solutions. He tends to demonize liberals and stereotype “others” - Middle Easterners as an example. I did appreciate that one of his protagonists was a journalist, although the rest of the field were depicted as ignorant sheep. I also find it funny that when a book slants left a lot of conservative reviewers will get up in arms and give that book low reviews, but not when the book slants toward their beliefs.

Great book. It’s not a stretch to think these things are really happening within our government and career politicians.

really enjoyed listening to this book

good book I enjoyed it

This is my no 1 audio book of the last 12 months. Never heard of the author (I live in Ireland) & this would not be my usual genre (female reader). But - I was hooked from the 1st chapter. A great gripping listen. Yes - it is brutal & cold & bloody at times but war is brutal as is politics. You only have to look at what Putin has done in the past month. Highly recommend this book.

The best book I’ve had in years! Great details and suspense with a great narration

Gripping. This is the fastest I’ve ever finished a book. Addictive good.

i want to read more of the Reacher series

Great base for the book series. Shit is gonna go down.

Very good. Prolly read all of his work now haha I recommend

I’m so glad that I was introduced to Jack Carr’s James Reece. I look forward to reading Reece’s next adventure.

exciting and tactically as well as technology sound.

Really great narration and one of the best audiobooks in this genre. So much detail but it is done so well. Jack Carr brings every scene to life.

the details are good.

Pretty good listen and easily had me listening for hours on end and not wanting to pull into the driveway. Reminded of me of Vince Flynn’s book Term Limits and Stephen Hunter’s book Shooter.

Loved it action packed can't wait to hear the next in the series.

Great book!! Tons of suspense and the narrator nailed it!

Amazing book! Listened to most of it on a family vacation, but really enjoyed reading it even more to finish the book off.

One of the best books I have read in a long time. Can’t wait for the rest of the series.

What a great book! 'Jack Carr' did an amazing job of making you feel like you were right there with Lt. Cmdr Reese during his mission. Even though this is a 'fiction' book, I'm fairly certain there were references to real life missions. God bless & Semper Fi.