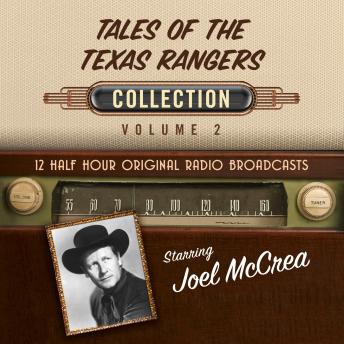 Tales of the Texas Rangers, Collection 2

#2 of Tales of the Texas Rangers Collection

Like its predecessor Dragnet – Tales of the Texas Rangers adapted actual police case files for its broadcasts. Leading each week’s investigation of an actual Texas Ranger case was the same Texas Ranger, Jayce Pearson, portrayed by movie star Joel McCrea. Because the stories were set in present day, Pearson used the latest scientific techniques to identify criminals. Unlike Joe Friday, Pearson didn’t have a regular partner, typically working with the local sheriff instead (who was usually portrayed by Parley Baer). Working environments would range from big cities to isolated wilderness areas that could only be reached on horseback. Produced and Directed by Stacy Keach, Sr. Tales of the Texas Rangers ran from 1950 to 1952 and featured radio’s top supporting actors. Its popularity spawned a 1955 Saturday morning television series starring Willard Parker and Harry Lauter broadcast on CBS until 1958. 9/30/50 “Clean Up”
10/8/50 “Living Death”
10/15/50 “Dead Give-Away”
3/25/51 “Breakdown”
4/1/51 “Pressure”
4/8/51 “Bad Blood”
4/15/51 “Conspiracy”
4/22/51 “Canned Death”
10/14/51 “Play for Keeps”
10/21/51 “Fugitive Trail”
10/28/51 “The White Elephant”
11/4/51 “Helping Hand”

This title is due for release on November 6, 2018
We'll send you an email as soon as it is available!