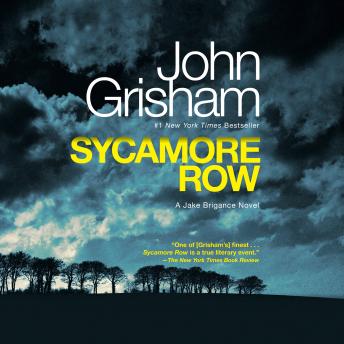 #1 NEW YORK TIMES BEST SELLER • John Grisham returns to the iconic setting of his first novel, A Time to Kill, as Jake Brigance finds himself embroiled in a controversial trial that exposes a tortured history of racial tension.

“Welcome back, Jake. . . . [Brigance] is one of the most fully developed and engaging characters in all of Grisham’s novels.”—USA Today

A Time to Kill is one of the most popular novels of our time. Now we return to that famous courthouse in Clanton as Jake Brigance once again finds himself embroiled in a fiercely controversial trial-a trial that will expose old racial tensions and force Ford County to confront its tortured history.

Seth Hubbard is a wealthy man dying of lung cancer. He trusts no one. Before he hangs himself from a sycamore tree, Hubbard leaves a new, handwritten, will. It is an act that drags his adult children, his black maid, and Jake into a conflict as riveting and dramatic as the murder trial that made Brigance one of Ford County's most notorious citizens, just three years earlier.

The second will raises far more questions than it answers. Why would Hubbard leave nearly all of his fortune to his maid? Had chemotherapy and painkillers affected his ability to think clearly? And what does it all have to do with a piece of land once known as Sycamore Row?

In Sycamore Row, John Grisham returns to the setting and the compelling characters that first established him as America's favorite storyteller. Here, in his most assured and thrilling novel yet, is a powerful testament to the fact that Grisham remains the master of the legal thriller, nearly twenty-five years after the publication of A Time to Kill.

I have enjoyed the narrator's delivery as well as the story line. It was nice to revisit all of the characters from A Time to Kill.

I thoroughly enjoyed this book - had trouble putting it down. It was long but worth every minute. I was amazed at how good the narrator delivered All the voices - just incredible!

So slow! The same thing was said 3 different ways.

Been a fan of Grisham for many years... amazing story teller. And the Narrator is just as great... the way he changes his voice for each character adds another dimension that takes it up several notches makes for a great, great read.

Narrator is amazing…lots of different voices for many different characters. I’ll listen to anything he narrates. Book is good, lots of character development and told in an engaging way.

Perfect narrator for the book. The story held my interest all the way through. I recommend it whole heartily.

Consistently kept my interest and wanting to get to the next detail.. Easy clear inflections and extremely interesting characters

Loved this book. I cannot believe I missed it when it came out. Story is great, narrator is perfect! John Grisham perfection

The narrator was as always phenomenal! His voice switches up with the various characters seamlessly and keeps the listener hanging on. The ending of this book was perfect. First John Grisham book I've cried over. Loved it!!

This is no doubt one of Grisham’s best written books yet. Excellent read.

I thoroughly enjoyed Sycamore Row! John Grisham is one of my favorite authors. I enjoy the character development. It’s fun to get to know them.

An absolute riveting story. From the beginning until the end, I loved it!

Loved this novel...great narration as well. I was interested the entire time and this is a long story.

I have never been a audio book listener ; until hearing Michael Beck. Book was a 7 out of 10

Excellent book could not stop listening

Very good read as usual by this author and narrated wonderfully.

Another great Grisham story. The history of the south in the mid 1900’s is a stain on America and he tells it in such detail and craft. Excellent listen.

The narrator is excellent

Could not wait for it to end. Too slow !

The book was very good, even though it was long it was interesting and kept my attention. The narrator was excellent, best I've heard with multiple voices so far.

Loved the book. Loved the reader!!!

I really enjoyed this book, was my first audio book, nareator did an amazing job. Now I have nothing to listen to but the radio, need to get into the next book very soon.

I absolutely loved this book. Finished yesterday and woke up this morning so sad that’s it’s over.

Good book to listen to.

The narrator really made this book quite enjoyable. A very talented narrator. Another good book by Grisham.

First John Grisham book I have listened to. Loved it. The narrator was great. Kept your attention without getting monotone.

Grisham gives a very personal insight into our history and it's impact on individual lives....compelling.

Prime Grisham. Couldn't stop until it was done. Excellent narration helped too!

If you love a good redemption story, you'll love this book. Grisham's knowledge of the history of the south lends credibility to the story. I enjoyed it very much.

Could not put it down. Mr. Grisham never lets me down. Had me engrossed from beginning to end.

A very entertaining book, it kept my attention. The narration is quite good, there are a lot of characters and some of their voices sounded similar at times.

A story that brings the past to the present. Can one really correct the wrongs of a previous generation.

Terribly written book. Written at a 4th grade level. If your used to reading good literature, then you will be very disappointed in this book. The narration is very monotone. I cannot believe this book has received such good reviews.

A very engaging . Held me for long stints at a time finished it in two(2) days. Loved it. Recommend it highly.

Lived this book! And I found myself using a southern accent after listening! ;0)

A typical John Grisham novel. It kept my attention until the end.

Excellent! Couldn't stop reading! I was thrilled with this one. Love Grisham!

Great narrator! storyline was a but predictable.

Another Grisham book that keeps you glued and the narration is top notch; almost as alluring as the story line.

Great Read highly recommend it to you. This will make you not want to stop until it's finished and then wish it didn't end!!!

Fantastic narration. Super slow book. Not much going on until last 25%

Another Grisham home run. A very intriguing story that leaves you wanting to know what comes next. Beck's narrative is excellent. He is comfortable to listen to and his use of varying characters makes the story come to life.

If you loved A Time to Kill as much as I did, don't read this book. What a dissappointment! I couldn't even finish it.

This is by far one of the best stories ever! Really enjoyed listening to it.

This was my first audio book and I really enjoyed the story and the narration. I felt like I was watching a made for TV movie

Loved this one. Jake Brigance is such a well-drawn character. In my Top 5 of Grisham books.

I enjoyed this book very much. the narrator did an extremely good job with all the voices.

John Grisham can make the mundane sound exciting. Add to that the fact that the plot is really intriguing and gripping, and you have the makings of an awesome read. And Michael Beck's narration brings it all to life in all it's magnificence. A great read, especially if you like legal thrillers and remember Jake Brigance from "A Time to Kill". Highly recommended.

Another great book by John Grisham with an enjoyable narration as well. Waiting patiently for their next. I am never disappointed.

What a great book! This is one you can't stop listing too.

This title is due for release on October 22, 2013
We'll send you an email as soon as it is available!