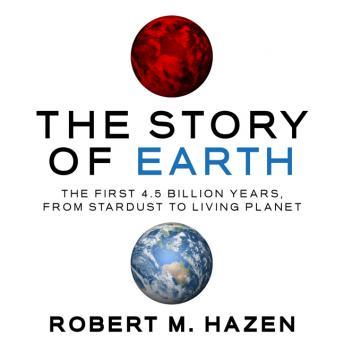 The Story Earth: The First 4.5 Billion Years, from Stardust to Living Planet

Earth evolves. From first atom to molecule, mineral to magma, granite crust to single cell to verdant living landscape, ours is a planet constantly in flux. In this radical new approach to Earth's biography, senior Carnegie Institution researcher and national bestselling author Robert M. Hazen reveals how the co-evolution of the geosphere and biosphere-of rocks and living matter-has shaped our planet into the only one of its kind in the Solar System, if not the entire cosmos.

With an astrobiologist's imagination, a historian's perspective, and a naturalist's passion for the ground beneath our feet, Hazen explains how changes on an atomic level translate into dramatic shifts in Earth's makeup over its 4.567 billion year existence. He calls upon a flurry of recent discoveries to portray our planet's many iterations in vivid detail-from its fast-rotating infancy when the Sun rose every five hours and the Moon filled 250 times more sky than it does now, to its sea-bathed youth before the first continents arose; from the Great Oxidation Event that turned the land red, to the globe-altering volcanism that may have been the true killer of the dinosaurs. Through Hazen's theory of "co-evolution," we learn how reactions between organic molecules and rock crystals may have generated Earth's first organisms, which in turn are responsible for more than two-thirds of the mineral varieties on the planet-thousands of different kinds of crystals that could not exist in a nonliving world.

The Story of Earth is also the story of the pioneering men and women behind the sciences. Listeners will meet black-market meteorite hawkers of the Sahara Desert, the gun-toting Feds who guarded the Apollo missions' lunar dust, and the World War II Navy officer whose super-pressurized "bomb"-recycled from military hardware-first simulated the molten rock of Earth's mantle. As a mentor to a new generation of scientists, Hazen introduces the intrepid young explorers whose dispatches from Earth's harshest landscapes will revolutionize geology.

Celebrated by the New York Times for writing "with wonderful clarity about science . . . that effortlessly teaches as it zips along," Hazen proves a brilliant and entertaining guide on this grand tour of our planet inside and out. Lucid, controversial, and intellectually bracing, The Story of Earth is popular science of the highest order.

This title is due for release on June 19, 2012
We'll send you an email as soon as it is available!