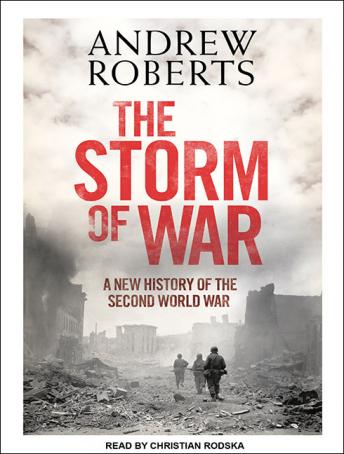 The Storm of War: A New History of the Second World War

The Second World War lasted for 2,174 days, cost $1.5 trillion, and claimed the lives of more than 50 million people. What were the factors that affected the war's outcome? Why did the Axis lose? And could they, with a different strategy, have won? Andrew Roberts's acclaimed new history has been hailed as the finest single-volume account of this epic conflict. From the western front to North Africa, from the Baltic to the Far East, he tells the story of the war-the grand strategy and the individual experience, the cruelty and the heroism-as never before.

In researching this magnificently vivid history, Roberts walked many of the key battlefields and wartimes sites in Russia, France, Italy, Germany, and the Far East, and drew on a number of never-before-published documents, such as a letter from Hitler's director of military operations explaining the reasoning behind the Führer's order to halt the Panzers outside Dunkirk-a delay that enabled British forces to evacuate. Roberts illuminates the principal actors on both sides and analyzes how they reached critical decisions. He also presents the tales of many little-known individuals whose experiences form a panoply of the extraordinary courage and self-sacrifice, as well as the terrible depravity and cruelty, of the Second World War.

Meticulously researched and masterfully written, The Storm of War gives a dramatic account of this momentous event and shows in remarkable detail why the war took the course it did.

Storm of War: A New History of the Second World War

This title is due for release on July 26, 2011
We'll send you an email as soon as it is available!