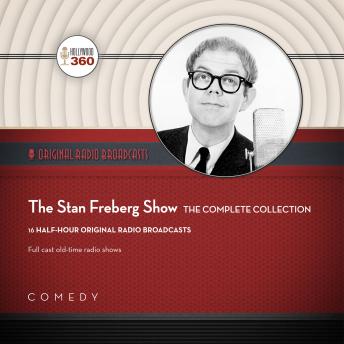 The Stan Freberg Show ran on CBS radio for only fifteen episodes in 1957. It starred comedian Stan Freberg and featured his stock company of performers: Daws Butler, June Foray, and Peter Leeds. It also featured singing star Peggy Taylor, the vocal stylings of The Jud Conlon Rythmnaires, and the musical direction of Billy May. Despite its short run, the show developed running gags and stock jokes that are still remembered today, including Freberg's ambivalence toward Madison Avenue to the overwhelmingly popular interviews with a sneaker-wearing Abominable Snowman. Much of the show took deadly satiric aim at the advertising business, making it difficult for CBS to find a sponsor. By week thirteen it was apparent that a sponsor would not be signing on, so CBS cancelled the show after just fifteen episodes.
The Stan Freberg Show was the last American network radio show to devote itself purely to comedy. This collection features all fifteen episodes of The Stan Freberg Show plus a bonus episode of The CBS Radio Workshop from 1956 starring Stan Freberg and his stock company, including Alan Reed (the voice of Fred Flintstone). On this thirty-minute show, Stan explains the art of satire to a skeptical censor and illustrates the explanation with his own recordings. The collection is a must for Freberg lovers!
07/14/57 - Incident at Los Varocis (First show)07/21/57 - Interview with the Abominable Snowman07/28/57 - Miss Universe Contest08/04/57 - Lecture on Hi-Fi08/11/57 - Orville Arrives from the Moon08/18/57 - Program Censor08/25/57 - The Lone Psychiatrist09/01/57 - Uninterrupted Melody09/08/57 - Spoof of 'The Honeymooners'09/15/57 - Another Hi-Fi Lecture09/22/57 - Francis Butch Carmley, Football Hero09/29/57 - How to Repair a Leaky Faucet10/06/57 - All About Werewolves10/13/57 - Sponsored by Freberg10/20/57 - Final Show08/31/56 - Bonus: CBS Radio Workshop - An Analysis of Satire