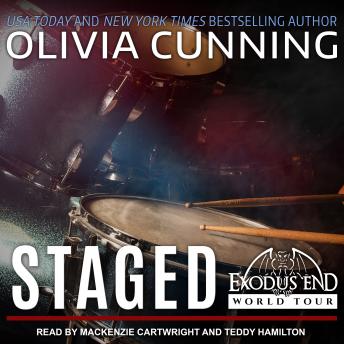 Exodus End's legendary drummer, Steve Aimes, plays the role of a rock star better than anyone in the business. Since his divorce, he's embraced every rock 'n' roll stereotype and uses those vices to keep women at a safe emotional distance, while keeping their physical distance recklessly close. He vowed years ago to never give any woman the power to break his heart again. He just has to keep playing the part, and never drop his guard, and stop obsessing over the keyboardist in their new opening act.

Roux Williams knows an opportunity like this only comes around once in a lifetime. Her band, Baroquen, has finally gotten their big break and are opening for Exodus End and Sinners-two powerhouses of rock-on the European leg of their world tour. She refuses to screw up this opportunity by getting involved with Steve Aimes no matter how gorgeous, sexy, and surprisingly attentive he is. She can't deny her attraction to him-the man has the body of a god and the face of a model-but he's absolutely off limits.

When their worlds are rattled by a ploy staged to destroy them, Exodus End's infamous bad boy and Baroquen's not-yet-famous good girl must figure out a way to have it all and each other.

This title is due for release on February 12, 2019
We'll send you an email as soon as it is available!