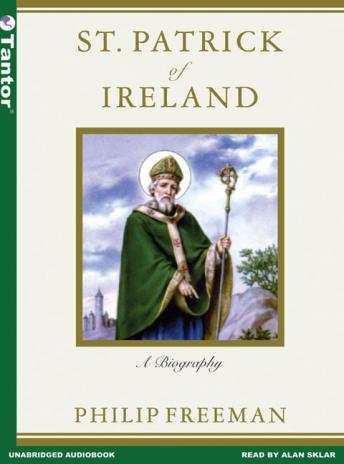 St. Patrick of Ireland: A Biography

Ireland's patron saint has long been shrouded in legend: he drove the snakes out of Ireland; he triumphed over Druids and their super-natural powers; he used a shamrock to explain the Christian mystery of the Trinity. But his true story is more fascinating than the myths.

Late in the 4th century Irish pirates captured a young, British citizen named Patricius from his parents' Roman villa. The boy was sold into slavery and sent to tend sheep in Ireland. After walking nearly 200 miles across bogs and mountains to the coast, he managed to escape on a ship full of pagan sailors and returned home to the astonishment of his family. Patrick was destined for the privileged life of nobility but, when he experienced a profound religious awakening, he decided to become a priest and return to Ireland to convert the Irish to Christianity.

The Patrick who emerges is even more extraordinary than the patron saint of legend - a passionate, courageous, and very human figure who exerted an incalculable impact on the course of Irish history.

'A fascinating and believable introduction to Ireland's patron saint... a colorful picture of Ireland at the end of the Roman Empire: its kings and headhunting warriors, gods and human sacrifices, belief in the Otherworld.' ~Publishers Weekly (March 2004)

This title is due for release on April 1, 2004
We'll send you an email as soon as it is available!