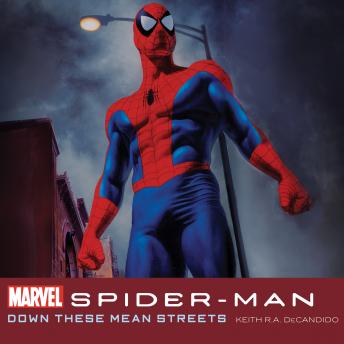 Spider-Man: Down These Mean Streets

A brand-new designer drug arrives in New York City with the force of a hurricane: Triple X, a potentially lethal combination of ecstasy and gamma radiation that is literally turning users from the shadowy, dank alleys to the glittering, raucous party circuit into living, rampaging nightmares. For high school science teacher Peter Parker, Triple X's onslaught on some of his students and his wife's professional life is as dangerous as it is unexpected. For Peter's secret alter-ego, the costumed crime-fighter known to the world as Spider-Man, the situation quickly accelerates from bad to worse, as the drug's effects run unchecked against law enforcement's and his own valiant efforts to rein in the city-wide chaos. But there is a growing consensus between Spider-Man and the police that, for reasons yet unknown, one of the arachnid's most fearsome enemies may be behind it all as part of a greater scheme to bring the city-and one of its most heroic and hated defenders-to its knees at long last.

Spider-Man: Down These Mean Streets

by Keith R. A. Decandido, Marvel

This title is due for release on March 18, 2021
We'll send you an email as soon as it is available!