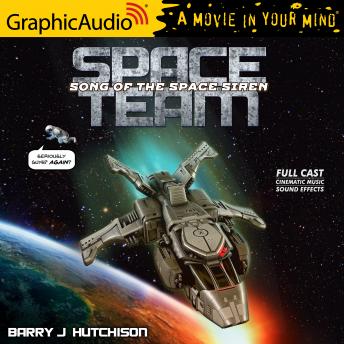 Cal Carver and his Space Team may have lost their ship, but they haven't lost their knack for attracting trouble. Just hours after setting foot on a new planet, Cal and the crew find themselves caught up in an interplanetary kidnapping plot. Reuniting the suspiciously-silent young victim with her parents on their far-off home world will make Cal rich beyond his wildest dreams. Unfortunately, half the pirates and bounty hunters in the galaxy have the same idea, and they're more than happy to take the girl by force. With their experimental new ship plagued by problems, a deranged space-warlord determined to watch Cal eating his own arm, and a whole lot of galaxy to get through, Space Team is about to embark on its most dangerous mission yet. The fourth hilarious installment in the bestselling Space Team sc-ifi adventure series, and the perfect jumping-on point for new listeners. Performed by Phil Thron, Danny Gavigan, Carolyn Kashner, Darius Johnson, Yasmin Tuazon, Scott McCormick, Christopher Walker, Terence Aselford, Chris Davenport, Rob McFadyen, Steven Carpenter, Richard Rohan, Bradley Foster Smith, Laura C Harris, Steve Wannall, Alejandro Ruiz, Melody Muze, Chris Stinson, Colleen Delany, Michael John Casey, Nora Achrati, Nanette Savard, Eric Messner, Nathanial Perry and Ken Jackson.