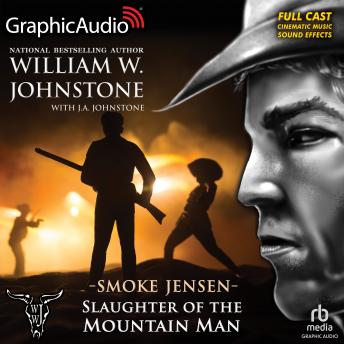 'In this action-packed western from national best-selling authors William W. Johnstone and J.A. Johnstone, mountain man Smoke Jensen sets his sharpshooting sights on an unhinged outlaw who’s carved out his own kingdom in the West — and declared war on the United States.

He calls himself The King. Once a respected professor, he was ruined by scandal. Now, he rules his own “country” — an area of western territory where an army of outlaws enforce his laws. Any town he claims as his own must pay “taxes,” collected from bank, stagecoach, and train robberies. When he learns that President Rutherford B. Hayes and General William Tecumseh Sherman are venturing into the far west on a tour of the nation, The King devises a plan to kidnap America’s leaders and expand his empire.

But The King didn’t reckon that Smoke Jensen had already staked his claim on the frontier. Traveling with the president’s entourage, the mountain man is not about to let this bloodthirsty, evil tyrant endanger his commander-in-chief and threaten American liberty.