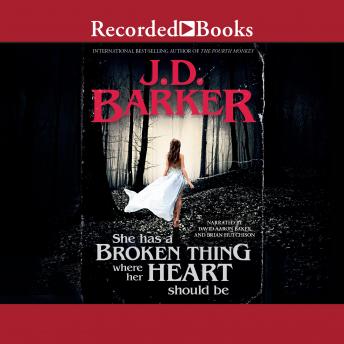 She Has a Broken Thing Where Her Heart Should Be

A haunting tale of suspense, rendered with the masterful skill only Barker could muster.

After the loss of his parents, young Jack Thatch first met Stella as a child—this cryptic little girl of eight with dark
hair and darker eyes, sitting alone on a bench in the cemetery clutching her favorite book. Gone moments later, the
brief encounter would spark an obsession. She’d creep into his thoughts, his every waking moment, until he finally
finds her again exactly one year later, sitting upon the same bench, only to disappear again soon after.

The body of a man found in an alley, every inch of his flesh horribly burned, yet his clothing completely untouched.
For Detective Faustino Brier, this wasn’t the first, and he knew it wouldn’t be the last. It was no different from the
others. He’d find another just like it one year from today. August 9, to be exact.

Isolated and locked away from the world in a shadowy lab, a little boy known only as Subject “D” waits, grows,
learns. He’s permitted to speak to no one. He has never known the touch of another. Harboring a power so horrific,
those in control will never allow him beyond their walls.

All of them linked in ways unimaginable.

She Has a Broken Thing Where Her Heart Should Be conjures thoughts of early King and Koontz. A heart-pounding
ride that creeps under your skin and will have you turning pages long into the night.

I really loved everything about this book. It was so thoughtfully written. All the characters were all nicely developed. I’ll definitely be revisiting this listen again.

Fantastic story, I loved it right from the beginning, the characters became real to me in my head and not all books can do that. Sometimes with long books you have patches where you think surely this could have been shortened, but not with this book I enjoyed every single minute.

Great book and the narrator is brilliant

I loved this book! Don’t be be put off off at the length… time flies by by when you’re drawn into the story and engaged with the characters. I couldn’t stop listening. Wonderful combination of intrigue, science fiction, thriller and some romance.

Great Book. Loved This One.

Narrated by David Aaron and Brian Hutchinson, She Has a Broken Thing Where Her Heart Should Be, captured my attention with its unique concept. An engrossing tale of a  young girl who appears on August 8 each year and the boy who is obsessed with her. First the title caught my attention, followed by the cover. Then when I read the synopsis, I immediately picked it up. A lengthy book, but worth each minute spent reading/listening. The story began with eight-year-old Jack at the cemetery visiting his parents’ graves along with his aunt Jo. While there he encounters Stella, a young mysterious girl. He is  enamored of her and cannot stop thinking about her, but he only able to see her once a year on August 8. Around this time Detective Brier investigates a strange case of homicide involving a burnt body with clothing  intact. Even stranger was the discovery one year later of another body under the same circumstances. Amidst these strange events, a little boy known only as Subject ‘D’ was kept in a lab, with no interaction with the outside world. This was a solid mash-up of sci-fi, mystery, suspense and action. There were so many things taking place, I wondered how they all tied together. I had several questions while reading, one of which had to do with the significance of August 8. The book may have been lengthy, but I never noticed as I found myself completely immersed in the world Barker created. Twists, secrets and surprise abound in this unique tale. I couldn’t wait to learn what would happen next.  The story spans several years and during this time we see the main characters come of age. I enjoyed getting to know Jack. Perfect by no means whatsoever, evidenced by the poor choices he made. He has been through a lot, but he persevered. I didn’t like Stella first because of her better than thou attitude towards Jack. However, as the story progressed, providing me with more details about this mysterious girl, my feelings towards her changed. The remaining characters proved to be an interesting bunch, especially Subject ‘D’. He was indeed the most dangerous of the lot. Narration  This was my first time listening to both narrators. It took me awhile to adjust to the voices. I had to change the narration speed a few times before settling on 1. 5x. They both  brought a lot to the story and handled the voices for the different characters very well. However, I was not a fan of Stella’s voice, which I found annoying. I thought their narration helped to enhance the story. Conclusion/Recommendation Overall, a good listen/read and one I recommend without hesitation.

I am not normally into books like this, but I loved it! I was very pleased with the narration as well!

Don’t be put off by the ridiculous title. I really enjoyed this book it was very easy to follow even with it being so long. It definitely could’ve been a bit shorter but I still thoroughly enjoyed it. I thought the narrators were great, some of the female voices were a little bit weird but it’s not easy for guys to do female voices. I look forward to listening to it every chance I got.

Amazing story! This book kept me engaged from beginning to end. The narration was superb!

This novel held my interest all the way through and held many surprises. The last ‘surprise’ was not really a surprise but the ending was good anyway. The narrator was excellent!!!

I actually loved it even though I had a feeling about there relationship Good bood and I'm looking forward to listening to more of J.D Baker

This is the first book written by JD Barker that I have read. GREAT story!! I’m already looking for my next read by Barker. The narrator did a wonderful job as well.. You could picture the scene clearly by the emotions he portrayed. Would definitely recommend this one!!

I loved the book! Very suspenseful, it had me wondering what was happening to our characters while I was "away" (as in not listening). I thought the narrator was perfect for this book.

The book was interesting but I think some of the narrative was too long. The narration was good and I would have given 4 starts except for the voice of the main character of Stella. I realize a man was doing it but he made her sound (both as a young girl then a young woman) like a constipated old lady. Very distracting.

SERIOUSLY THE BEST BOOK EVER!! I flew through the 23H&37M hours in milliseconds!! The novel kept me engaged during ever second!

I love this book- so interesting!

Good story and I’ve always enjoyed listening to David narrated books first heard of him with the Odd Thomas series. Worth the time to listen too.