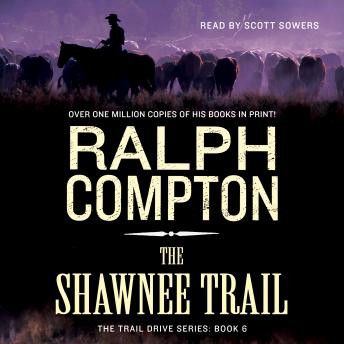 Stampedes, rustlers, and hostile Indians wouldn't slow them down. They were bound for Kansas, and a Texas-sized fight!
The only riches Texans had left after the Civil War were five million maerick longhorns and the brains, brown and boldness to drive them north where the money was. Now, Ralph Compton brings this violent and magnificent time to life in an extraordinary epic series based on the history-blazing trail drives.
The Shawnee Trail
Long John Coons, the Cajun son of a conjuring woman, was driving 2,000 head of cattle north from Texas to the railroad in Kansas--through Indian Territory and outlaw strongholds. At his side was a beautiful woman with a sordid past, three ex-cattle rustlers, some renegate Indians, Mexican vanqueros and a straight-laced young trail boss. And while Long John tried to keep his hot headed crew from killing each other before they reached the end of the line, the biggest dangers was waiting up ahead--where an all-out war in Kansas make the Texas fight together, or die at the same time.

This title is due for release on October 11, 2011
We'll send you an email as soon as it is available!