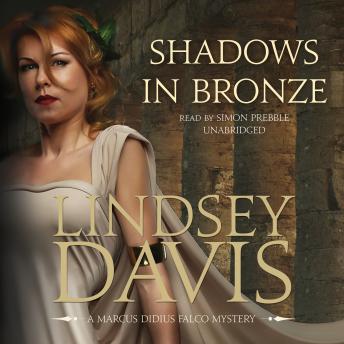 #2 of The Marcus Didius Falco Mysteries

It’s the first century AD, and Marcus Didius Falco, ancient Rome’s favorite son and sometimes palace spy, has just been dealt a lousy blow from the gods: the beautiful, high-born Helena Justina has left him in the dust. So when the Emperor Vespasian calls upon him to investigate an act of treason, Falco is more than ready for a distraction. Disguised as an idle vacationer in the company of his best friend Petronius, Falco travels from the Isle of Capreae to Neapolis and all the way to the great city of Pompeii … where a whole new series of Herculean events—involving yet another conspiracy and a fateful meeting with his beloved Helena—is about to erupt.

Lindsey Davis’ Shadows in Bronze is historical mystery at its best.

This second in the series is a clear thumbs up. Lots of action, complicated plot that held together, and a new character, the nephew, who is quite appealing. The narrator was a bit too fast for my taste, and the accent a bit too plumy. Otherwise excellent. I await #3.