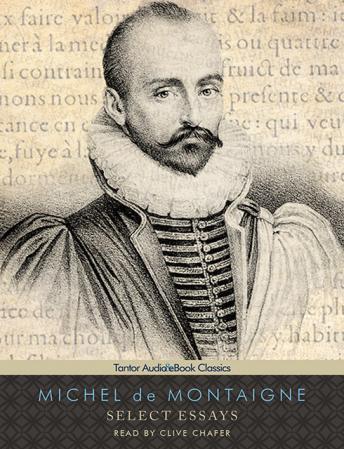 Michel de Montaigne, one of the foremost writers of the French Renaissance and the originator of the genre of the essay, wrote on subjects ranging from friendship to imagination, from language to conscience. This collection includes twenty-two of Montaigne's essays, including 'Of Prognostications,' 'Of the Custom of Wearing Clothes,' 'Of Pedantry,' and 'Of Friendship.' Throughout Montaigne's writing, he approaches his subject matter with rationality and skepticism, constantly searching for truth and inquiring into the nature of the human character. Montaigne's essays have been widely read since their first publication by such great writers as Shakespeare and Ralph Waldo Emerson and continue to resonate for modern audiences. This edition is the translation by Charles Cotton.

This title is due for release on May 25, 2011
We'll send you an email as soon as it is available!