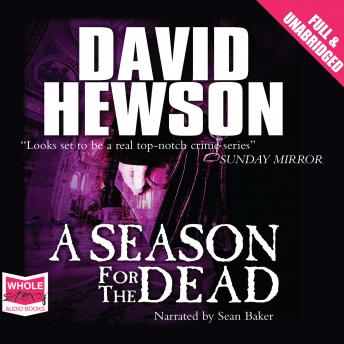 A Season for the Dead: Nic Costa, Book 1

In a hushed Vatican reading room, the scene was shocking: a crazed professor shot dead after brandishing evidence of a grisly crime. Moments later, two bodies are found in a nearby church, each with a gruesome calling card from the killer.

As the August heat takes Rome in its fiery grip, the news of the two brutal murders holds the city in thrall. And as the media gathers and Vatican officials close ranks, a young detective is sent to the forefront of the case. Nic Costa is the son of an infamous Italian Communist, a connoisseur of Caravaggio, and a cop who barely looks his twenty-seven years of age. Thrust into the heart of a killing spree that will rattle his city down to its ancient bones, Nic meets a woman who will soon dominate both his consciousness and his investigation.

A cool, beautiful professor of early Christianity, Sara Farnese was in the Vatican library on that fateful day, a witness to her colleague's strange outburst and death. But her role will become even more puzzling as more bodies are found: Each victim killed in a gory tableau of Christian martyrdom. And each victim had intimately known Sara, whose silence Costa cannot quite crack and whose carnal history becomes more lurid and unfathomable with every revelation.

Soon, a nightmarish chase is implicating politicians and priests - while at the heart of the matter remains the woman Costa is both investigating and guarding. Wanting to believe in Sara's innocence, Nic still cannot turn his eyes from the truths he is uncovering. Even as the secrets of a woman, a killer and a city begin to unravel... with devastating consequences.

This title is due for release on December 1, 2007
We'll send you an email as soon as it is available!