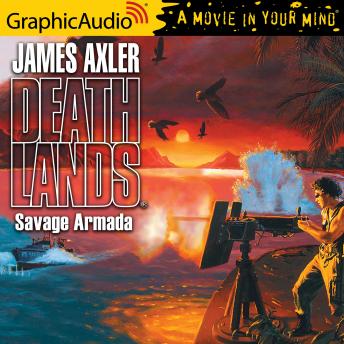 A nuclear apocalypse almost destroyed Western civilzation in 2001, leaving in its place the forbidding world of Deathlands. Though the human spirit has not been broken, the new rules of survival are harsh and barbaric. As barons fight for power in a savage new America, power is claimed with the salvaged arsenals of a predark world: weapons, gasoline and those willing to kill.

The Marshall islands, once the testing grounds for twentieth-century weapons of mass destruction, remains pervesely beautiful. But the infested waters become the battleground for looting pirates and sec men in still-functional navy PT boats, all driven by greed and madness to plunder the predark caches of science and technology hidden in the islands. Ryan Cawdor and his band emerge in this perilous waterworld, caught in a grim fight to unlock the secrets of the past.