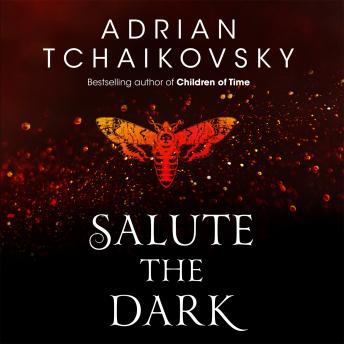 #4 of Shadows of the Apt

Salute the Dark is the fourth book in the critically acclaimed epic fantasy series Shadows of the Apt by Adrian Tchaikovsky, winner of the Arthur C. Clarke Award. As spymaster Stenworld makes a stand in his home city, others must chose where their loyalties lie.

Uctebri’s long search for the Shadow Box is finally over. Now the vampiric sorcerer can begin his dark ritual. The Wasp-kinden’s Emperor believes this will grant him immortality, but Uctebri has his own plans – for the Emperor and the Empire.

The mighty Wasp armies are on the march. And now war is imminent, spymaster Stenwold can finally separate allies from false friends. For the Empire won’t stop until a black and gold flag hangs over Collegium, Stenwold's home city.

Tisamon the Weaponsmaster could chose to face the Wasp Emperor himself with a blade in his hand. But he’d need to abandon friends and family, embracing degradation and loss. Yet is he driven by Mantis-kinden honour, or being manipulated by something far more sinister?

Salute the Dark is followed by the fifth book in the Shadows of the Apt series, The Scarab Path.

Ooooo damn, the ending though. The build gets you wanting and wanting to know how it will be and man it does not disappoint. The action in the end sequence is brilliantly portrayed and makes up for a slightly slow middle sequence. But I guess to build a story, you need to have some slow sequences. Absolutely brutal though, enjoyed this one. Narrator continues to be very good at holding the story together

This title is due for release on February 18, 2021
We'll send you an email as soon as it is available!