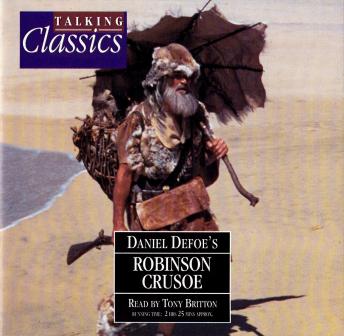 Defoe's masterpiece is part adventure and part do-it-yourself book. It describes the experiences of the resourceful sailor and castaway Robinson Crusoe. After escaping shipwreck and being swept on to an island with nothing but his wits, Crusoe survives ? and even prospers ? through his ingenuity and perseverance. He builds his own dwelling and makes furniture and clothes. He lives alone until the arrival of cannibals brings him an unexpected companion and the chance landing of mutineers gives him the opportunity to return home. 1. Castaway - Shipwrecked - Hope in the morning. Robinson Crusoe tells of the youthful restlessness which drove him to run away to sea as a young man. After eight years, he is to be found on a slaving ship bound from Brazil to Africa when a violent storm blows up. The ship hits a sandbank and the crew abandons her before she breaks up. But a huge wave capsizes their boat and Crusoe alone is carried ashore by the raging sea and left half-drowned on the beach. He realizes that he is the sole survivor and is cast into despair. Crusoe is without food or any means of survival and has on him only a knife, a pipe and some tobacco. He climbs a tree to spend the night, falls into an exhausted sleep and wakes to see that the ship has been driven close inshore. Filled with new hope, he swims out to it, intent on taking away any provisions and implements that will help him to keep body and soul together. 2. Survival Tactics - Stores from the ship - Building a home. Crusoe finds the ship undamaged but with all boats missing. He builds a raft from spars and piles it with food, clothing and firearms. Using broken oars, he propels his clumsy vessel ashore. Over the next 13 days, he visits the ship 11 times, taking anything of use, including axes, cables and canvas. By the time a storm sinks the ship, he is well equipped. On a plain by a cliff, he pitches a tent inside a barrier of stakes. Crusoe brings all his goods into this compound. Then he draws up a list of the pros and cons of his life, determining to be satisfied. He makes furniture and grows barley from seed. 3. Exploration - The island's greener side. Crusoe finds abundant fruits, keeping some grapes to dry as raisins. On the west of the island he enters a delightful woody vale where citrus trees and melons grow wild. He considers moving his base to this lush spot but instead builds himself a second 'country' home, not wanting to live too far away from the coast and out of sight of passing ships. On the first anniversary of his deliverance from shipwreck Crusoe has a solemn day of thanksgiving. 4. An Ominous Sign - A useless boat - Footprint in the sand. Crusoe spends two years building a canoe by hollowing out a tree. However, when he tries to circumnavigate the island in it, he is almost swept away by the tides. Back ashore, he abandons ideas of sailing away, being resigned to his fate. One day, after living alone on the island for 15 years, he is appalled to see footprint in the sand. Terrified, he flees to h camp and hides. He redoubles his defences after seeing the remains of a cannibal feast. 5. Timely Rescue - Terror renewed - A victim saved. Alarmed by the evidence of visiting savages, Crusoe spends more time inside his stockade. However, while out exploring he spies a fire and his terror increases. After 24 years on the island, Crusoe sees another cannibal party dragging two victims ashore. While the first is being killed, the second runs away and outstrips his pursuers. Crusoe saves the fugitive, then beckons to the trembling man to come near. The man swears to be his devoted servant. 6. Man Friday - Burning the remains - Scripture lessons. Calling his new companion Friday, after the day on which he saved the man's life, Crusoe takes him home and gives him food. Next day, they visit the site of the cannibal feast and burn the remains, Friday being less upset than Crusoe by the grisly task. Crusoe decides to educate Friday and teaches him English and Christianity. Friday excels at both, especially religious studies and asks Crusoe searching theological questions that he cannot answer. Ruefully, Crusoe admits Friday is a better Christian than himself. 7. A Rum Lot - Mutineers and officers - Crusoe to the rescue. Twenty-eight years after Crusoe's shipwreck, Friday rouses him with news of a ship approaching. Crusoe realizes that it is English, but the crew which comes ashore surprises him ? three of the 11 men are clearly prisoners and begging for mercy. Arming themselves, Crusoe and Friday approach the captives, who are the captain, his mate and a passenger, in the process of being marooned by mutineers. As the rogues sleep, Crusoe gives the prisoners muskets and together they overwhelm the dissenters, killing two of them. The rest of the mutineers beg their captain's forgiveness. 8. Victory and Escape - Outwitting mutiny - Happy return. Crusoe orders the rowing-boat to be holed and sends the more suspect sailors to a distant cave, as prisoners. The rest join Crusoe and the captain's party. The ship sends another crew to find out why the first group has not returned. Thinking their comrades murdered, they speedily go back to their vessel. However, they return to the island and leave three men to guard their boat while the others explore. Crusoe sends Friday and the mate off as a decoy, while he captures the men guarding the boat. When the mutineers return bewildered, they are captured. The captain and Crusoe launch a midnight attack on the ship and regain it. The captain gratefully offers Crusoe his vessel and all sail happily back to England.

This title is due for release on May 4, 2017
We'll send you an email as soon as it is available!